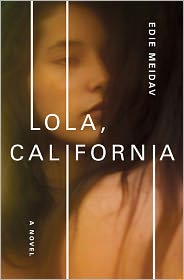 Last summer I fell in love with a wordy piece of coming-of-age fiction starring an emotionally mute young woman and a doomed love affair with an older, even more emotionally mute man, a boxer. Thinking about that book now I just see long, hot weekends on our deck with a glass of water and all of my outdoor reading accessories in a pile next to the lounge chair. I’d read. Stop. Look at the cover. Flip back to pages where I’d folded a corner and re-read. It took forever to get through and, uncharacteristically, that’s what I wanted. To never finish Anthropology of an American Girl. It totally fit this sort of inspired, albeit unfocused fit I was having. I sometimes wonder if I’d still five-star it if I’d read it in, say, November.

This past month I fell into a similar relationship with Lola, California by Edie Meidav, this massive mix of a lot and not enough.

Rose and Lana are best friends in that way teenaged girls are best friends. Barely distinguishable, two personalities pooled into one that they call Lola — after the song, of course. At night they roam the streets of Berkeley, inventing false back stories and torturing frat boys. They have this impenetrable-ness — literally and figuratively — because they are always together. By day, whether they like it or not, they are under the tutelage of Lana’s guru father Vic Mahler, who probes them with questions and then probes their answers. He has legions of fans and followers who sometimes camp in the Mahler’s front yard.

This decade-jumping story reveals early that Mahler is in his final days on death row, but also sick with brain cancer. He is tended to by an empathetic jailer who provides human contact. He mostly wants to see his daughter while it’s his daughter’s friend, who is now a lawyer, who wants to see him. The Lolas haven’t seen each other for two decades. Not since the two were living together in New York City, a tandem act at a strip club, and Lana saw on the news that her dad had done the thing that landed him in lock up. What he did and whether he is guilty is not necessarily a secret, but it’s only eluded to late in the story.

Rose re-connects, not necessarily by chance, with her old friend at a spa near the prison. Lana is living on-site as the girlfriend of a former Mahler follower who is trying his own hand at influencing packs of people. She is with her twin sons from a previous relationship that ended in suicide.

This book is dense, word and concept heavy. The plot just seems to be a place where Meidav has parked so she can make deliciously descriptive and slow meandering sentences. She’s like a super-skilled Frisbee player: The venue doesn’t matter.

The years later portrait of the former friends has its surprises. Rose has been consistent in her infatuation with Lana. And Lana has spent the years regularly reinventing herself — unable to do anything about what is at her core — trying to avoid association with the Mahler name. Vic Mahler is a humbled version of himself, the last bounces of an ego with an air leak.

Unfortunately, I made the mistake of reading this one on Kindle. This is one of those books you want to flip pages on and fan yourself. Carry it around and touch the cover. But since I just have inked dot words that have been beamed down to the page from the sky, it feels like reading it was a mirage. I don’t own the book any more than I own a song that gets stuck in my head. Rookie error.