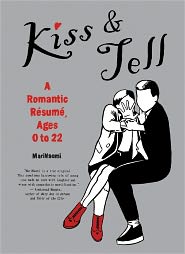 Sat down to write about artist MariNaomi’s draw-all tell-all graphic memoir Kiss & Tell: A Romantic Resume from 0-22,‘and found myself penning memories about playing tug-o-war over the one neighborhood boy on Fifth Place Northwest. Playing boyfriend-girlfriend in a room full of girls, sitting in a bean bag chair and drinking water we pretended was spiked with “Spanish Fly.” Surely something we had seen on “Love Boat,” our faces pressed together making “Mmm Mmm” noises, our heads making figure eights.

A “StarWars” fanatic whose friendship I forked left from the first time I saw Madonna on MTV. There she was, bed head and black lace, set against a white box. A clear line in the sand: No longer giving a rat’s about R2D2, but craving, absolutely craving tulle skirts, pouty lips, exposed stomach, flirtation, and please God, rhythm.

I bet this is a pretty natural response. Especially if the reader came of romantic age to a Cure soundtrack, like MariNaomi. The premise isn’t unique. Neither are the gritty, fuck-you-dad teen tantrums of this West Coast-based former wild child. Her taste for the mohawked and dreadlocked, the homeless teens, older dudes and future inmates suggests a certain After School Special-ness I wouldn’t have dared to test in the 1980s, which makes the gawking all the better.

It start with her origin story: Her father as an officer in the army teaching English in Japan and falling for one of his students, her mother. It’s a short story that says a lot about the conservative backbone of the family. In the final panel they coo over their young daughter, blessing her with the opportunity to someday fall into a love like theirs. “One day you’ll find a man to take care of you,” her father says.

Things quickly shift from their story of chaperoned dates to a not-so-innocent story of a pedophile babysitter who trades her nudity for grape gum, snaps a bunch of pix, then shows her his in a chapter called “The Most Beautiful Penis I’ve Ever Seen.”

She breaks her story into sections divided by age and the stories quickly turn from cries of Cooties to sneaking a boy in her bedroom window, Billy, who is cockblocked by, simultaneously, a menstrual explosion and her mom’s footsteps in the hallway. She grows up quickly in these pages, losing her virginity in her early teens, dropping out of school, running away from home, dabbling in the ladies and maintaining a relationship with a boyfriend who is sent to jail.

Marinaomi is probably one of those people who has probably gotten the old “ohmygah, you should write a book about your life” over drinks with friends. She definitely succeeds, sharing the deets on dozens of romantic relationships without blinking. It’s solid entertainment that won’t change your life, but it will definitely take you back to that time in the bushes when you played kissy face with the neighbor.