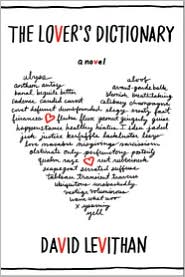 David Levithan’s novel The Lover’s Dictionary, is long on concept and short on content. In his first novel for grown ups, Levithan tells a romance alphabetically using the definitions of certain words to explain the relationship between the male narrator and his significant other.

From the dating site to the first date to the cohabitation, the unnamed narrator has an anecdote for each word in his dictionary. Through these definitions we learn more and more about the relationship. It starts sweet and grows sour, and there is a certain will they make it tension throughout. But still, it’s not very much to hang a novel on.

If this book had taken any more than two nights of before-bed reading to finish, I’d be giving it a big thumbs down. But since it’s quick and clever, I can give it a hearty “it’s all right.” Really, it’s a book that’s hard to work up a head of steam about either way. How can you hate something so cute? With definitions for abstinence (n/a) and, “kerfuffle, n. From now on, you are only allowed one drink at any of my office parties. One. Preferably a beer”

While I applaud Levithan’s courage to try something unconventional, in telling a romantic story at such a remove sort sucks the life out of it. We don’t even get the names of our couple. In fact, I’m pretty sure Levithan went out of his way to not reveal the gender of the narrator’s partner, even going so far as to have a best friend refer to her friend, the partner, as “our darling one.” It felt a little contrived. But I can get behind the ungendered thing (Written on the Body by Jeanette Winterson is one of my favorite books), what I can’t get behind is the lack of actual character development. Sure we learn about drinking problems and infidelity, but because the characters are so flat these sorts of revelations don’t have much impact.

It’s as though by trying to make the romance as universal as possible, he ended up giving us a generic, impersonal love story that’s only so-so.