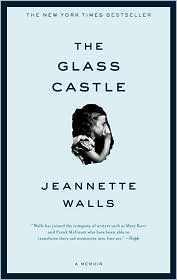 When Jeannette Walls’ memoir opens, she has left her Park Avenue home and is en route to a party when she sees her mother dumpster diving. She’s not surprised. Still, it’s a buzz kill and she skips the soiree. Later she will meet her mother for lunch. Ask her if she needs anything.

The Glass Castle is Walls’ story, told in episodic bursts, of growing up under the guardianship of eccentrics. Her father, Rex Walls, is a smart guy, creative, whose big ideas are trumped by booze. Her mother, Rose Mary, is a self-described adventure addict. She’s an artist and prone to depression and can’t help loving that Rex Walls. She’s licensed to teach, but can’t commit to the classroom. The family, including Jeannette, her old sister Lori, and younger brother Brian, spend the early years on the lam. Busting out of small desert towns in the cover of night. Doing the “Rex Walls skeedattle” which means bringing along just one favorite keepsake and sometimes sleeping in the car.

The kids are still elementary school aged when try to count how many places they have lived and guesstimate 12 after trying to figure out what it means to “live” somewhere. Does it have to include a house? Do they have to be there a certain number of days?

Money is scarcer than running water. Food is pilfered from garbage cans in the school bathroom. Roofs have holes. Roaches and other animal life are not dissuaded from sharing their living space. When Jeannette rolls out of the moving car or burns herself to the point of needing skin grafts, the events are treated about as lightly as when they toss their cat out of the car to lighten their load as nomads.

And then there is Rex, in a moment of sweetness, taking each kid one by one to look at the sky and pick out a star to keep as their own. Merry Christmas. And there is Rose Mary, bringing home stacks of library books and self-teaching the kids to a degree that when they enter public schools they are way ahead of their peers. Rex loses another job.

Eventually at the end of their rope, the family heads to Rex’s hometown of Welch, West Virginia where they first live with a surly alcoholic grandmother who fondles Brian and an uncle who tries to fondle Jeannette (In both situations, her parents shrug off the incidents as no harm-no foul-life lessons).

As Jeannette gets older and her family’s lifestyle comes into focus, she takes charge. She fashions her own set of braces, knowing that they can’t afford orthodontia. She gets a job. She finds an after school oasis. Things don’t necessarily change at Chez Walls. But she does come to understand that it doesn’t have to be like this forever.

These stories — and there are many — are more outrageous than Orphan Annie trying to outrun those hoodwinkers. Walls’ memoir is told in this straight-forward no frills, journalistic style that clearly states the facts but offers no commentary, blame, or judgement. You see Rex Walls removing road stones from her forehead, winning back the favor of the daughter who spent hours alongside the road wondering if her family even knew she fell out of the car. It’s sometimes physically uncomfortable to read. It’s good, though, in that gawker way of watching a shit show when you know the shit show turns out okay in the end. An obvious and not obvious comparison would be Mary Karr, women with mucky upbringings. But Karr is a writer-writer, while Walls is more of a storyteller with a super interesting story to tell.