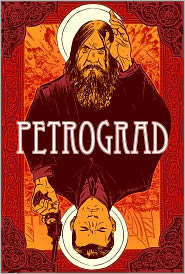 Historical Fiction. Despite its oxymoronic implication, I love the stuff. It takes the known part of history and infuses and embellishes the unknown into awesome possibilities. It?s like the “Jurassic Park” of literary genres with the fiction playing the part of the amphibian DNA and the History playing the part of Tyrannosaurus Rex DNA. Which, I guess, puts us, the reader, in one of the two self driving Ford Explorers that tour the park and eventually get crushed by the T. Rex . . . OK, so the metaphor breaks down somewhere in there but you catch my drift, right?

Petrograd by Philip Gelatt and Tyler Crook is a fantastic graphic novel that details some of the events in the city of the same name (also known as St. Petersburg or Leningrad) from 1916 to 1918. Specifically, the murder of Russian mystic and consultant to the Russian Tsar and Tsarina, Grigori Rasputin. This time period and this place are incredibly significant in world history, World War One was raging across Europe and the Bolsheviks were preparing for the revolution that would eventually usher Communism into Russia.

The story follows a young British SIS (Secret Intelligence Service) agent named Cleary who is given orders by his superiors to act on a drunken suggestion made by young Russian Prince Felix Yusopov that Rasputin should be killed. The Tsar and Tsarina have become infatuated with Rasputin and no political decisions are made without him. Many in Russia believe the government is paralyzed by this arrangement and gossip about the Tsarina spending so much time with this strange holy man while the Tsar is with troops on the war front.

Like any good intelligence officer Cleary has connections with the Russian Secret Police and is sleeping with a communist revolutionary. Seemingly playing all sides at each other, it?s easy for Cleary to forget who he is, what he believes, and what he wants most.

This is great history and great fiction. Philip Gelatt makes you believe that this really could have been how it all went down and Tyler Cook does a great job on art. In a book that is mostly about white Russian dudes dressed in warm winter outerwear covering much of their body, it would have been easy to make everyone look indistinguishable from one another, but Cook handles it deftly and I never had identity issues with his art.

For a Liberal Arts grad with a major in history, Petrograd was right up my alley. I devoured each page as if I was velociraptor tracking down Sam Neil and Laura Dern through the under brush of Isla Nublar all while. . . Listen, this is a great book. Read it and then read about the real story.