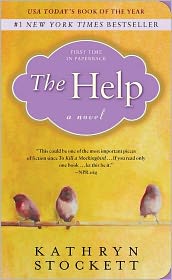 When people who don't read much tell me a book is amazing, I cringe, which is why the birds on the cover of Kathryn Stockett's The Help have been glaring from my bookshelf for over a year. But then I started hearing some praise from readers, and I saw the amazing Viola Davis in the commercials for the movie, I finally gave in to the birds.

After reading it I really don't understand why there are three birds on the cover. Is it because we hear the story from three different women? Is it that women are chatty and so are birds? Is it the type of bird that should mean something to me? I'm not a birder, so if there is supposed to be some symbolism between that type of bird and segregation in Mississippi in the 1960s, it's totally lost on me.

But birds aside, The Help should be categorized right alongside Sara Gruen’s Water for Elephants – good, fluffy historical fiction that will grab a casual reader and charm an avid one.

The three women who tell us the story are Skeeter, a white woman from a rich, cotton plantation family; Aibileen, a quiet black maid to one of Skeeter's best friends; and Milly, a loud and boisterous black maid and Aibileen's best friend. It's the early 1960s in Jackson, Mississippi and segregation is going strong with blacks and whites living in different parts of the city and the initiative of some white women to make separate bathrooms for their black maids.

Skeeter is in her early 20s and unmarried, turning her mother into the 1960s version of Mrs. Bennet. But from the beginning it's easy to see that Skeeter doesn't quite fit in with the idea that college is for getting your MRS like everyone else. Skeeter also starts questioning the division between the white and black communities when she returns from college to find the maid she grew up with has left.

Skeeter is a character you will love, but Aibileen is the one you will cheer for. Aibileen is unhappy with her work and life, but she's a keep-your-head-down-and-don't-get-into-trouble kind of person, because even if a person didn't start the trouble, if he is black in Jackson, Mississippi, it's his fault. You'll cheer and be nervous for Aibileen when she slowly starts breaking this rule.

Minny is the Greek chorus of the book, the maid who says what she thinks and does outlandish things at work. Throughout she keeps referencing this horrible, awful thing she did to a previous white woman, who totally deserved it, and you're going to want to read quickly to find out what Minny did because it's awesome.

As you've probably gleaned if you've seen the commercials for the movie version of The Help, Skeeter decides to write a book from the perspective of the black maids of Jackson and she recruits Aibileen to help her. But don't think the book is all clever, funny characters and sneaky interactions between Skeeter, Aibileen, and Minny. This is Mississippi in the 1960s and little stories of horrible beatings and injustices permeate the tale to remind you that what these women are doing is really risky.

The risks the women take drive this story and chapters from each of them are woven throughout the tale, making it hard to put down. Stockett cleverly leaves you intrigued by one woman's story to abruptly jerk you into another woman’s. I don't know how many times I hoped for more at the end of an Aibileen chapter only to start reading a Minny or Skeeter one, and then annoyed when a Minny or Skeeter chapter ended and I had to read an Aibileen one. It was a vicious circle, one that kept me up way too late, way too often. Bravo, Ms. Stockett, bravo.

So do the birds symbolize the chattiness of the three women? The twittering of the white women and how they ignore the fact that the help can hear their every word? I still don't fully understand the birds on the cover, but the book was a speedy summer read and I really enjoyed it.