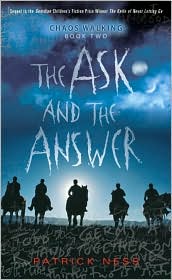 The last time we left young Todd Hewitt in Patrick Ness' Chaos Walking series, he was riding into Haven, with a severely injured Viola, to find that the Prentisstown army he thought he outran had already overtaken the town. The Ask and the Answer is all about Mayor Prentiss' rule, the quiet, native Spackle, and the choices idealistic teens must face in times of war.

Mayor Prentiss was the mayor of Prentisstown, the town Todd ran from in The Knife of Never Letting Go. Now dictator in Haven, which he renames New Prentisstown, the Mayor has separated the men and women, including Todd and Viola. The women are seen as a threat since they don't have the gift of Noise, having their thoughts shown to the world, like the men do.

Todd's job in New Prentisstown is to manage the Spackle work camp. The Spackle are the native species to this planet and are being used as slaves. This is where Todd often makes the wrong choice when it comes to the ethical questions of war, but what is he to do, take on the Mayor's army by himself?

Viola has similar tough choices to make, but hers center around who to trust – the women banding together to overthrow the Mayor, or the Mayor who promises Todd's safety? Both sides are manipulating her in some way, but is one more trustworthy than the other?

I loved the first book in this series for being a quick, mesmerizing adventure. I love this book, too, but it's very different than the first.

One glaring difference is that the story isn't told by just Todd. Todd and Viola tell their stories and I love the introduction of Viola's voice. She's more real and vibrant, and we see that she cares about Todd just as much as he cares about her.

The other big difference is the pace of the novel. This is not the adventure you get in the first book. While there is adventure, it's not as constant because this book dives into the deeper questions of war. Who is right when both sides do horrible things because they think they're right? Is there a right and wrong in war?

I love young adult dystopian fiction because it's fascinating to watch unjaded youth dealing with the ethical questions of war, justice, and truth. The lens of a child is much more hopeful which makes watching war through their eyes even more heartbreaking. We get all of that here and it hurt watching the consequences of their choices when they only had poor options to choose.

Like the first book in the series, this one ends with a game-changing cliffhanger and I can't wait to read the next book. I’m getting nervous, though, because this series can’t end well and I’m scared for what will happen.