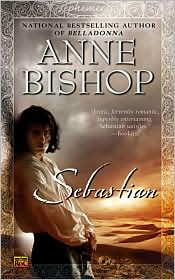 Long, long ago when the Eater of the World was destroyed, the lands that made up Ephemera were divided and now the only way to travel from one to another was by crossing magical bridges. These bridges can be tricky because they don't always transport you to the place that you want to be, but rather the place that your heart desires most.

These lands are now tended by women known as Landscapers and the bridges are managed by men known as Bridges. There are only a select few with the power to manage these areas and to also create new lands and new bridges where needed. Among them is a rogue Landscaper named Belladonna. She is feared by everyone ? even those within the worlds she's created. The Wizards want her dead and just uttering her name brings a shiver of fear to other Landscapers.

When Belladonna was only 15 years old, she created a place of darkness known as the Den of Iniquity. A place where demons live and only humans with the darkest of desires find themselves. It was the act of creating such a dark world that caused her teachers to wall her inside a garden in an effort to contain her and her gifts. Imagine their surprise when she got out.

Now the Eater of the World has been unleashed and the only person that can save Ephemera is Belladonna. By her side in this fight are her brother Jim, a Bridge; and her cousin Sebastian, a man whose father is a wizard and whose mother is a succubus. Sebastian lives in the Den and Jim lives in the Sanctuary. The Sanctuary is a place of light and peace that was also created by Belladonna. She is a balance between both the Light and the Dark.

Even though this book is about the possible end of Ephemera, is it really about Sebastian's struggle with being part human, part demon. What you're told right away in the book is that the reason Belladonna created The Den of Iniquity was to give her cousin Sebastian a home. Sebastian is a physical representation of the struggle between Light and Dark. He struggles with being a demon and being human and feels he doesn’t belong in either. A lot of what you see happening in Ephemera is reflected within Sebastian’s internal struggle.

“Even demons need a home.”

Anne Bishop has written a beautiful novel. Absolutely beautiful. Beyond beautiful, this novel and the world she has created is believable and vivid. The characters have a depth to them that makes you think you could meet them on the street and have coffee with them some day. The story is good and it keeps you hooked. Don't go into this novel thinking it is full of action because you'll be disappointed. It is definitely more of an emotional ride and the hero's quest is one of the heart. Even though the action isn't really prominent in this novel, the story is still intriguing. I found myself more interested in what happens to a few of the minor characters like the Farmer then in the fight against the Eater of the World.

Sebastian is a reflection of that voice of doubt that can be found in everyone. That part of you that longs for acceptance and a home and questions your place and purpose in the world. The message of this novel is deep, but it is laid into the story so well that you don't realize it until after you've closed the last page and had time to reflect. Or in my case, after you've pouted that Bishop stopped when she did and didn't continue because you wanted. . . no, needed. . . more about what happens to the characters when the final showdown occurs.

Suffice to say, I'll probably never again cross a bridge without thinking of this novel.