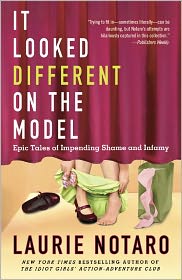 As a nonfiction, humor-loving reader, I have heard of Laurie Notaro and her hilarious reputation. My roommate from college basically worshipped the woman, but I’ve never read any of her books. So when I picked up It Looked Different on the Model: Epic Tales of Impending Shame and Infamy I had high hopes.

Notaro is an essayist and humorist, It Looked Different on the Model follows true to her form. Each of these essays are about something that happens in her life that most all can relate to, but she chooses hilarious ways to react. She is not shy about giving too many details, she tells the reader what she is like, her husband, family, friends, and her dog. Basically, it’s a Laurie Notaro reality show written down and without fade-outs, video montages, or background music. But hey, she does have a fart chart! Seriously.

These essays capture everything Notaro has going on her life at the moment, instead of being a roundabout memoir this book has snippets from her life. She tells you just enough to keep you interested, but not too much that you get bored with her life. In these essays she gives the reader a sense of what kind of person she is and the kind of person she would like to be, but probably won't become.

Notaro's humor is self-deprecating but at the same time you don't feel bad for her at all, you look forward to her stories, to what she will say next. As she goes through telling stories about delusional clothing shopping, her alter ego Ambien Laurie, fighting with the post office, and FWD (Forecasting World Destruction) e-mails from her mother, you really start to feel like this woman could be one of your friends with funny stories.

“I thought I could not only get an “M” on but that I could button it. I have learned my lesson. I have. I have. I promise I have. I'll only try things on with Lycra in them from now on. Never take on cotton straight. Never! You always need a mixer!”

I had high expectations for Notaro in this book and while I thought it was funny, it wasn't as hilarious as I expected. I was looking forward to peeing my pants while laughing and that just never happened to me. Now, I'm not saying that this books isn't funny, there are definitely parts I laughed at but it isn't as funny as I wanted it to be. But hey, I read a lot of humor non-fiction so I could be a little jaded at this point.

It Looked Different on the Model is a great read and a book I recommend for someone who is getting into essayists. Notaro has a knack for relating to the reader in a way where she sounds like your best friend telling you about her crazy day after you just had the crappiest day. Notaro will not only make you giggle when you can relate, but she will make you feel better, because, at least you aren't taking your tween nephew to see a statue of Babe the Blue Ox and forcing him to put his hands on Babe's balls for a picture.