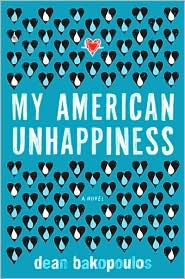 Why are you unhappy? That’s the question thirty-something midwestern Zeke Pappas asks his subjects. He’s gathering answers for his magnum opus, a study of American Unhappiness. When the novel opens we’re nearly finished with the Bush administration, seven years after 9/11, and Zeke is hoping to figure out what it is that makes Americans unhappy, which is different from sad, he explains at one point in Dean Bakopolous’ novel My American Unhappiness. The novel is littered with the answers Zeke gets from his website. They range from hilariously mundane to serious anomie.

But while Zeke’s trying to study American unhappiness he ignores his own through a willful lack of self-awareness. Zeke’s got myriad reasons to be unhappy. Almost too many to be believable. Here, let me list a few:

Yes, it’s absurd and I think that’s what the author was going for, but still. . . Zeke’s a strange, uneven character and My American Unhappiness is a strange, uneven novel. It reads a bit like a kinder, gentler Super Sad True Love Story. Where Gary Shtyengart’s satire is biting and unrelenting, Bakopoulos’ has a nicer, midwestern feel to it, which isn’t the problem. Actually, that’s the best part of the book.

The problem here is that Zeke doesn’t feel real, or right. I get that he’s supposed to be an unreliable narrator but even with that, things don’t add up. Zeke’s inner-monologue and the words he actually says to people sound like they’re coming from two (and sometimes three) different people, none of whom would actually exist in the world.

The one thing Zeke wants more than anything is custody of the twins, and a lot of the book follows him trying to find a wife so he can keep the girls. But it’s hard to root for Zeke because he’s an emotionally unstable alcoholic with no social skills. Who, in their right mind, would want him raising two young girls? Nobody. Knowing that Zeke should fail at his quest, actually wanting him to fail makes it hard to invest in his story.

The whole time I read the novel I felt uneasy. The writing is good, and some of the insights are keen. There are scenes and moments of utter awkwardness that are awesome. Each time Zeke approaches another marriage prospect you kind of roll your eyes and dive into the scene with glee, excited to see how he’s going to mess this up. But knowing that he’s going to mess it up every single time takes away any sort of anticipation or tension.

I think the biggest issue here is that Zeke is absurd and about 85% of the situations he’s involved in are absurd, but at the heart of the story this is about a man trying to get custody of children he loves, which is not absurd. These things don’t mesh well together so when the book and Zeke are sincere it feels phony, unrealistic, and out of character.