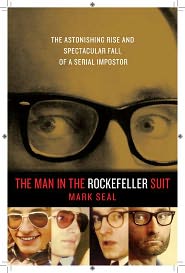 Before the advent of Facebook stalking, there was a precocious teen named Christian Karl Gerhartsreiter who lit out of a small German town and made for the United States in the guise of an exchange student. He gave his name an American makeover, and studied Thurston Howell III’s upper-class accent. He coaxed an unassuming Wisconsinite into a quickie green card marriage, then oozed his way into the Rolodex of the rich widows of San Marino, California.

Journalist Mark Seal has written an account of the man’s ascent through society — helped along by eventually adopting the name Clark Rockefeller — in a true crime account The Man in the Rockefeller Suit?that traces three decades, a handful of aliases, and eventual kidnapping and unrelated murder charges. Seal travels to Rockefeller’s former haunts and interviews about 200 one-time neighbors and friends, a group that is divided between chatting freely about the brilliant sociopath and those who are still angry about falling for his con. Seal also uses statements made in court by Rockefeller’s ex-wife, a smart woman who footed the family’s financials for nearly ten years without suspecting anything was amiss.

The story starts near the end when Rockefeller — now going by Chip Smith — kidnaps his young daughter, Snooks, during one of his three days a year of visitation. He knocks out the social worker tasked with making sure Snooks isn’t kidnapped. Then he dupes a friend into driving the duo to the airport and they jet off for a new life, less assuming than the previous. Then the story doubles back to the roots of young Gerhartsreiter, a wily kid with big dreams.

The book is divided into two sections. The first covers Rockefeller’s early years in the United States, working his way across the country and faking a career in the movie biz. He settles down for awhile in California and earns puppy-dog like acceptance in social circles. Along the way he has cultivated a depth of knowledge in exactly the kinds of things rich people like to talk about. His dress and mannerisms suggest a pure bred and at this point his name suggests links to English royalty. The first half ends with him leaving town in a truck that belonged to acquaintances who have gone missing.

In the second half, he has reinvented himself again as a film producer trying on a stint on Wall Street. He starts with the churches attended by society folk and then weasels his way into parties and job titles and eventually a wife with a pretty sweet earning potential.

The entire story is a wonder — enough so that the Lifetime Movie Network took on their own version of the tale that played a year ago. The first half is pretty repetitious, reiterating that people were drawn to the con man, especially women, and that he was smarter than smart. Things really ramp up once he heads out east and takes on the Rockefeller name. The bullshit is bolder. The eccentricities are more eccentric. But the questions loom larger and Seal leaves plenty of them unanswered: How does this man cultivate a collection of fraudulent art pieces that are good enough to fool true art aficionados? How were these elaborate lies, which were seemingly researched and plotted and layered to avoid detection, concocted? And once it was revealed that her husband was not who he said, why didn’t his wife do anything with the information beyond getting custody and spiriting the tot off to London?

Also: Seal does this curious thing of suddenly putting himself and his reporting into the story, which comes across a little rinky dink. He would be better as an invisible reporter relaying the deets.