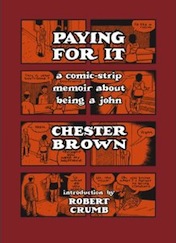 In June of 1996, cartoonist Chester Brown’s girlfriend Sook-Yin — who would be his last girlfriend — admitted she had fallen in love with another man. She wanted to see how things would play out with this drummer and talked it out with Brown, who encouraged her to give it a shot. He continues to live with her and consider things like romantic love and committed relationships. He develops a solid case for being anti hearts and flowers.’… There were only three reasons why I wanted to have girlfriends,’ he tells a platonic friend in the beginning of his book Paying for It. “One: because it’s socially expected — guys who don’t have girlfriends are considered to be losers. Two: I liked the ego boost of having a woman who wants to have that sort of exclusive relationship with me. And three: sex.”

When his friend suggests that he engage in one-night stands, he tells her: “I don’t have the social skills necessary to pick up women for casual sex.”

This is undoubtedly true.

Brown’s graphic memoir is about his transition into becoming an unflinching john who decides in 1999 that his human need for love is satiated by family and friends and that his human need for sex can be satiated by soliciting the prostitutes or escorts he sees advertised online and in publications. His story includes the women he meets with and his philosophical debates with his friends over the morality of his lifestyle and the legitimacy the profession and whether it should be legalized or regulated.

He meets dozens of women and each is disguised in the pages with fake names and no identifying characteristics. He learns that he dislikes fake breasts, worries that some of the women aren’t legitimately 18 years old and that sometimes he has to request a condom before they perform oral sex. He also has conversations about American history and the series of life events that landed the escort face first in his lap. Some he sees consistently, including one who is his favorite until the sex suddenly begins to feel empty and he moves on. With some he discusses his work as a cartoonist and he starts using his real name when he makes appointments.

Plenty of the spare panels feature a stick-ishly limbed Brown joined missionary style to an anonymous woman. Others feature him naked and flaccid, having pleasant post-coital conversations. His intent is obviously not to titillate, but to provide a journalistic series of first-hand experiences.

Brown is hyper self-aware, at times acting like his own analyst. When Sook-Yin finally asks him to move out of their shared space so that she can live with her boyfriend, Brown sits around, a stickish figure in tighty whities acknowledging that he feels depressed. Then he realizes that he has just had a brief glimmer of happiness, so he backtracks to the root of the upswing: Where had his thoughts strayed that brought on that feeling? Ah. An image of sitting up in his own bed in his own home reading. And with that he has worked through his sadness and exorcised it. Plus: Now he can invite the prostitutes into his own home.

Brown is a little prickly. A friend in the afterward describes him as “robotic.” He knows himself and understands human emotions — although he doesn’t really subscribe to them. Jealousy, he tells a friend who questions how he continues to live with Sook-Yin, is a learned behavior. He simply doesn’t feel it. There are plenty of character traits that are anti-social, including his admittance that a 28-year-old woman who greets him at the door is older than what he was looking for. He also sneak attacks friends by starting debates about prostitution, specifically issues he has clearly given much thought to. They don’t stand a chance against his fine-tuned arguments. On the other hand, much of what he is saying makes sense. Relationships are not necessarily the cure-all for a person looking for happiness. And what is wrong with a scenario in which a person wants to have sex and another person consents to sell it to him/her — with the inclusion of personal guidelines like no kissing or oral sex. The last faction of the book includes further arguments in favor of legalizing prostitution and notes that build on things that appear in the panels. This part gets to be a little much, but is consistent with Brown’s very clinical style of presenting the most 100 percent thorough argument he can give.