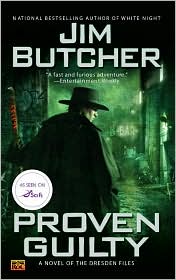 While the last two or three books of the Dresden Files series were fun and enjoyable they were lacking the something-something that makes this series brilliant. Book eight definitely brings back the pizzazz that I have come to expect.

Proven Guilty opens with Harry at a meeting of the White Council where a teenage boy is being executed for unknowingly breaking the laws of magic. Not only is watching a child being killed difficult, but this brings up the pain of his childhood where he had once stood and faced execution because of using dark magic. The only reason he is alive today is because Ebenezer McCoy took him on as an apprentice and saved his life.

After the trial, Ebenezer asks Harry to look into why the Summer and Winter Courts of Faerie have not attacked the Red Court even though they continue to trespass on the Nevernever. He is also asked to find out who has been using black magic in Chicago.

With all of this on his plate, you can imagine his surprise when he gets a call from Molly Carpenter, the teenage daughter of his good friend Michael Carpenter. She is at the police station where her boyfriend is being held because they think he assaulted people at a horror movie conference. Molly claims he is innocent and begs Harry to help.

Turns out Molly is right and there is some bad magic on the prowl at the horrorfest. Someone is summoning phobophages (beings that feed off fear) and they are killing people at the convention. Harry has to figure out who is using this dark magic before they kill more innocent people. Adding to his list of complications is a White Court vampire named Madrigal Raith (a cousin to his half-brother Thomas) who has came to town to kill him.

Then of course there is that whole issue with the Summer and Winter Courts?

In the end, Harry takes on a great responsibility that changes both the tone of the books moving forward, but it also changes Harry. There are other changes such as Murphy being demoted and Ebenezer and Dresden realizing that there is a traitor in the White Council. This traitor might be part of a group that is causing the majority of issues that the White Council has to face and they begin to refer to them as the Black Council.

This is definitely among my favorites in the Dresden Files series. The characters all fit perfectly and Butcher brings back old faces (Fix, Lily) while developing some of the fringe characters (Ebenezer). There seems to be a resurgence of the energy that made the first few novels so brilliant coupled with a breath of fresh air into the story. I can't put my finger on it, but whatever it is I like it.

Proven Guilty gets two gold stars and an “A” for Awesome.