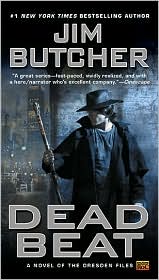 In book seven of the Dresden Files series, Harry is battling two necromancers, someone that can reanimate dead bodies and control them. Wizards and spirits alike fear them. In this book, Harry is approached by Mavra (a Black Court vampire that he thought he killed in the last book) and she gets him to agree to locate a book called The Word of Kemmler by blackmailing him.

Turns out this book is the lost teachings of a man named Kemmler who was a powerful necromancer the White Council tracked down and killed years ago. He left behind instructions in that book for one of his former apprentices to become as powerful and as evil as he was. There are now two apprentices in Chicago fighting over the book and Harry has three days to find it, stop them, and deliver the book to Mavra or she will release photos of Murphy shooting what looks like a homeless person (except it is really one of Mavra's henchmen from Blood Rites).

As you can imagine, all hell breaks loose.

We discover that the war against the Black Court isn't going well and out of two hundred Warden's only fifty-two are still alive. Somehow Dresden's arm gets twisted enough that he agrees to be sworn in as a Warren, much to the dismay of his nemesis Warden Morgan. The Fallen Angel, Lasciel, makes her presence known in a big way and Harry taps into the power of hellfire. Murphy is on vacation and Raith is around, but more of a babysitter than a major player.

The development of Lasciel in this novel is a pretty interesting element. If you recall back to book five, Death Mask, Harry fought the Denarian's but at the end of the book was tricked into picking up the coin of the Fallen Angel Lasciel. Even though he barely brushed it, a part of her was imprinted in his mind and he is able to communicate with her but is not fully taken over by the dark coin. In this book, we get a taste of just how powerful Lasciel is and how she tempts Harry with unimaginable dark power.

One of my favorite parts of this book is a line by Harry's dead father. Harry believes he is talking with the spirit of his dead father and lamenting the fact that someone put a death curse on him. This person cursed Harry to “die alone.” What his father says to that is beautiful, “Everyone dies alone. Death is a doorway that everyone walks through alone. But, you are surrounded by people that love you on either side of that doorway.”

While there are some deeper elements such as Lasciel, for the most part this book is big, boisterous and brimming with humor. I can't decide if Butcher was having fun with this novel or if he just had no idea where to take the story, but knew he needed to add a few key elements (Lasciel, Wardens) into the mix. I deliberately kept this review as short as possible because I didn't want to give away any of the good pieces. This book is great because of the humor that Butters (a local coroner) adds to it and because even when the story gets on the verge of over-the-top, Butcher finds a way to ground it. Just barely.