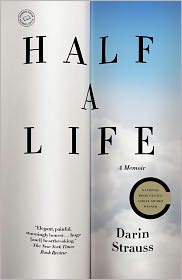 Anyone with a vivid imagination and a something-ton vehicle who has ever cruised alongside a wobbly bicyclist has probably mentally played out this scene: Biker veers left into the path of the car, defies gravity by skirting up the hood, face pressed into the windshield, body tossed like a limp towel to the shoulder of the road, the thump of flesh bags dropped into gravel, the glint of a reflector and the crush of metal.

In the case of Darin Strauss, this is exactly what happened toward the end of his senior year of high school. His Oldsmobile-load of friends en route to a mini golf course; the victim was the athletic younger schoolmate, Celine Zilke.

‘Half a life ago, I killed a girl,’ Strauss writes in his memoir Half a Life, the story of 18 years of living with the proverbial blood on his fender, an accident that was ruled an accident by witnesses and authorities. Still, it happened during those years when a teenager already feels the harsh and judge-y gaze of peers — all the more penetrating because it involves a dead girl.

‘How do I keep the accident from being the main thing about me forever,’ he wonders.

After graduation, Strauss tries to shed this distinction. He goes away to college and holds the story captive in his own head. He replays Zilke’s mother’s funeral-side curse to live for two as he works his way into adulthood. He thinks of the girl when he reaches for a can of soda and realizes she will never get to reach for another soda. Occasionally, he gets to the point in relationships where he feels that he has to tell a girlfriend — and these moments are met with mixed responses: awkward comforting gazes, phone calls that aren’t returned, a sharing of a personal tragic experience, anger. Finally, 18 years after it happened, married with two children, the writer who is known as a novelist shares his most-consuming story.

Half a Life is honest in a way that had to be hard to write: A moment at the scene of the accident when some pretty girls wander over and ask what happens and he purposefully and self-consciously morphs himself into the portrait of a grieving man. The assertion that maybe young Celine was suicidal, holding fast to a journal entry she had penned the day of her death in which she reveals that she has finally realized that she is going to die. (Someday? Or within a few hours? Hard to decipher the emo intents of a high school girl with a journal). Sometimes he feels Celine with him; Sometimes he feels like he should feel Celine with him. And the numbness.

This story is, obviously, gripping. But Strauss doesn’t let that keep him from applying word-magic in the way he tells it.

“I’ve come to see our central nervous system as a kind of vintage switchboard, all thick foam wires and old-fashioned plugs. The circuitry isn’t properly equipped; after a surplus of emotional information the system overloads, the circuit breaks, the board runs dark. That’s what shock is.”