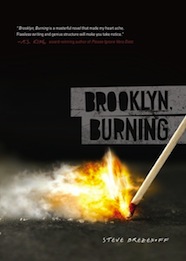 I cried when I finished reading Brooklyn, Burning by Steve Brezenoff. While I’m generally a crybaby, I wouldn’t need to use my toes to count how many times a novel has made me cry.

But there I was, snuggled into bed turning the last page of this brilliant, profound young adult novel my face wet. They weren’t tears of sadness or regret, it was joy and happiness.

My joy, at first, was for the tender love story between Kid and Scout, two sixteen-year-old runaways who spend the summer in Greenpoint, Brookyln. Kid discovers Scout one morning outside of Fish’s bar, where Kid likes to spend the night whenever Fish allows it. Scout’s clutching a flyer that Kid and Felix made the summer before calling for band members. Oh, before I get too into this I want to say that I love how this books swirls with music, and not just The Replacements’ references. The music writing is beautiful, but this more than a book about teens who like music. Like I said this is a love story, a beautiful love story.

Kid tells Scout that Felix is gone, but the two of them can still make a band. There’s some mystery surrounding Felix and last summer, specifically the fire that burned down an abandoned warehouse where Felix and Kid used to stay along with a bunch of other homeless squatters. It’s this fire that brings the Police to Fish’s bar and gets Kid hauled off to jail where we get to meet Kid’s not-so-understanding parents.

The novel unfolds through alternating chapters as Kid talks about last summer with Felix and what led to the fire, and Kid telling Scout about this summer with a sort of “do you remember?” thing. Kid is an intriguing and charming narrator, and the fact that we never find out Kid or Scout’s gender is an amazing feat of storytelling and brings an added level of intrigue to the story. If the unnamed gender of these two central characters is distracting at all, it’s only because you’re hoping Steve dropped a clue somewhere. I spent a lot of time looking for a hint, a small clue so I could say “Aha! I figured it out.” But even if I (or any reader) had “figured it out” it would say more about my ideas of gender, what’s considered feminine and what’s considered masculine than anything else.

This book reminded me a lot of Jeanette Winterson’s Written on the Body, which is one of my Top Ten Favorite Books of All Time.

What I adore so much about both of these is how they elevate love to some sort of spiritual plane beyond gender and sexual attraction and into the realm most often discussed by philosophers, poets, and theologians. Though it sound so corny and cliche, these books show how all that matters is love.

But make no mistake Brooklyn, Burning is the antithesis of cliche or corny. It’s original and moving and going to be a very important book in the lives of many kids who need it.

And this brings me to the second reason for the joyous tears. As I laid in bed crying I was so happy not just for Kid and Scout and the hopeful, optimism in their story, but for all the queer or trans kids who will find this book. Reading about Kid and Scout and their band of supportive people — male and female, peers and adults– will definitely bring comfort and support to someone who needs it. Kelly Barnhill says it much better than I ever could.

Brooklyn, Burning is a beautiful love song of a book. A song to youth and summer and music and love and all those things that make life worth living no matter your age or gender.