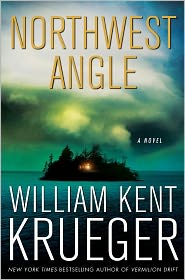 William Kent Krueger is the author of the New York Times bestselling, award-winning Cork O’Connor series. He also has one of the more charming About pages I’ve ever read. You should go read it, especially the ‘Flameboiled fiction’ section.

Anyway, the eleventh volume in his wildly popular series, Northwest Angle, will be released at the end of the month. To support the release of the new book, Kent has quite a few readings coming up. First up is 7 p.m. August 12 at the Barnes & Noble in the Galleria. Then he’ll be at Once Upon a Crime at 7 p.m. on August 30th. Finally he’ll be at the Barnes & Noble in Har Mar on September 1 at 7 p.m.

What book(s) are you currently reading?
Dixie City Jam by James Lee Burke, and Tinkers by Paul Harding.

Have you ever had a crush on a fictional character? Who?
Yes. When I was thirteen years old, I had a crush on Rima, the bird girl in W.H. Hudson’s beautiful novel Green Mansions. Spoiler alert: I cried when she died.

If your favorite author came to Minnesota, who would it be and what bar would you take him/her to?
At this point, I’d love to go drinking with Cormac McCarthy. And I think we’d sit on the patio at W.A. Frost, in F. Scott’s old neighborhood.

What was your first favorite book?
It’s a toss up between The Count of Monte Cristo, and War of the Worlds.

Let’s say Fahrenheit 451 comes to life, which book would you become in order to save it from annihilation?
Piece of cake: To Kill A Mockingbird.

What is one book you haven’t read but want to read before you die?
Want to read, or feel I ought to read? Want to read: The entire Bible, cover to cover. Ought to read: James Joyce’s Ulysses.