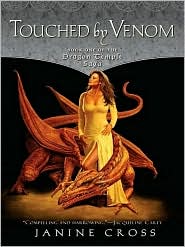 I'm not ashamed to admit that I am shallow. . . when it comes to book covers. I will judge a book by its cover and whether or not I like the cover carries a lot of weight on whether or not I'll give the book a chance. In this particular instance, I thought the cover was cheesy and not something I'd read. Until I saw right on the front cover five little words above the author's name: “Compelling, and harrowing,” ? Jacqueline Carey. If Carey can give a book that kind of review, then I can look past a cheesy cover.

The story is narrated by the main character, a girl named Zarq. You're given the impression that Zarq is telling the story when she is much older and reflecting back on these events in her life as a way of explaining how she became who she is today (which you never find out because this book is the first of a saga and ends abruptly). The tone is at times slightly bitter but always reflective. Never apologetic. She is just trying to tell her story.

When the story opens, Zarq is nine years old and lives with her mother, father, and older sister in a village on a large dragon estate, or Clutch. Despite the back-breaking work of living as one of the poorest members of the Clutch, Zarq is a typical nine-year-old. She plays with her friends, gets bored in Temple, has spats with her sister, and is devoted to her parents, especially her mother.

It is during this time that a series of events take place that forever changes the life of Zarq and her family. Each estate is allowed one male dragon and it is the job of a Dragon Master and his apprentices to care for this dragon and train it. The male dragons are the pride of every estate and Dragon Masters are revered as holy. During the annual festival of Mombe Taro when new apprentices are chosen and whipped into the order in front of the whole estate a series of events are started all due to the fateful meeting of Zarq and the Dragon Master.

I don't want to give away anything of the story because it is truly brilliant and worth reading on your own. But, I would like to point out a few interesting elements of the story that surprised me. First of all the heroine, Zarq, is not like any heroine I've ever encountered. Usually the heroine undergoes an epic struggle yet uses her wits and strong character to prevail. This book spans the years of her life from nine through seventeen. Zarq is a child. She makes decisions like a child. She's selfish and oblivious to the bigger picture. When she takes action it usually ends up failing and hurting the people around her. She's tormented by an addiction and haunted by the ghost of her past. You want to love this broken, abandoned child but at the same time you want to shake her teeth out.

Her mother is another interesting element in the story. Zarq's mother is a Djimba ? a woman with mottled brown and green skin that can use magic for both good and bad. Not only are Djimba dirty and lower than low, but they are feared for their sorcery. Zarq's mother comes to the Clutch as a sixteen-year-old slave. Zarq's father is instantly in love with her and claims her as his “Garden of Children” and together they raise a family.

Throughout the story you both admire and hate Zarq's mother. She is obviously more concerned with her eldest daughter than she is with Zarq and a lot of the pain and heartbreak in Zarq's life can be blamed on her mother's decisions. She is a character that you love to hate. You can empathize with her actions, but at the same time it’s difficult to watch where she leads her youngest daughter and ultimately her entire family because of her determination to rage against the system.

The most personal element of this book for me is the first half or so of the book when Zarq is just nine and dealing with everything that is going on. In one scene, she refused to leave her mother who has been badly injured and stays with her for four days in a cramped latrine and then makes the decision to be banished along with her. In another scene she is refusing to listen to the other women and gets everyone in trouble because she won't leave her mother's side. It hit a personal note with me because my son is about to turn nine. The author captured that element of a child so perfectly in Zarq's actions, thoughts, and decision that it was hard to read at times because I could see my own child acting in exactly that manner. It made the story more real for me. And it makes your heart break for that little girl who just wanted to be loved.

Later the narrator is describing a scene where Zarq makes yet another ill-fated decision and she says, as if in a half-hearted apology, “What would you have done at sixteen?” And it just reinforces that this child is not only broken, but also a child, one that has been dealt an incredibly tragic hand and didn’t have the kind of upbringing that would prepare her better for the world.

Touched by Venom is intense. It sticks with you like a dirty film on your teeth. It holds you captive from the first line until the last word. Excellent book.