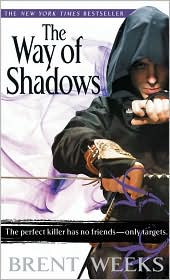 The Way of Shadows is visceral, dark, and gritty. It gets under your skin and you can't put it down. I know, I read all 677-pages in one day. Even when my head began to ache and my eyes got blurry, I couldn't put it down. Finally, at 3:30 a.m. I finished and threw myself into bed and woke up thinking about it. Ironically, the thoughts I woke up with weren't all that positive.

I'd never heard of Brent Weeks before I found this book at Half Priced Books while trolling the science fiction section, killing time last week. The first thing I noticed was the cute guy on the cover and then the nice line above him reading “New York Times Best Seller.” The description on the back cover seemed interesting enough, so I laid down my $4 and brought it home.

Two chapters into the book I was ready to scream. I kept checking the cover to make sure I'd read that line of it being a Bestseller correctly. And I had. It was. ” Supposedly”, I thought sarcastically. The first few chapters were difficult to follow. They were a choppy and frustrating attempt at setting up the social and political theme of the book that surrounds the main character, Azoth.

Azoth is a child of eleven living in a pit of destitution known as the Warrens. He is a parentless member of a childrens Guild known as the Black Dragon. Basically, a gang of child thieves lead by a Big, or a boy at least sixteen years old. In Azoth's case, the Black Dragon guild is run by Rat ? a fat, cruel boy that uses rape, abuse, and cruelty to control his guild. It isn't an easy life by any means. Which is why Azoth is looking for a way out and he finds it with a man named Durzo Blint.

Blint is a wetboy, a killer-for-hire. He's not just any wetboy, he's the best. He is a legend among killers. Azoth decides that he wants to become Blint's apprentice. At first Blint refuses, but changes his mind and gives Azoth a task to complete in order to show he's ready. Within five days, Azoth must kill Rat and bring back evidence that he did it. Azoth is terrified (afterall, he's only eleven).

During all of this, Rat has been provoking Azoth and planning on having him made into an example. He wants to show everyone in his guild that to defy him means permanent sorrow, not just death. Day five rolls around and Azoth still hasn't done anything. He probably wouldn't have done anything except Rat decided that instead of making him an example, he was going to make an example of Doll Girl, the little girl that Azoth protects. I'll spare you the details, but Weeks doesn't. As I said, this book is visceral.

As a book worm, I have a few rules that I follow. One of them is that I have to read the first ten chapters of a book, regardless how much I dislike it before I allow myself to abandon it. So, I chewed through the first six chapters like I was eating glass. It was painful and daunting. Then I get to Chapter Six and the next thing I know, I can't put the book down. The action doesn't stop. We go through a span of roughly ten years as we watch Azoth become a wetboy and we learn more about the politics and social structure.

We fall in love with people like Blint, Doll Girl, Logan, and Momma K. The action is fabulous and the pace is intense. Weeks knows how to put together an action sequence and he is able to paint a very raw, elemental scene which makes the story more intense. The fight scenes are some of the best I've ever read in a science fiction novel. The plot twists are brilliant and play in perfectly to the story.

However, things just seemed to fall apart in the last few chapters. I found myself thinking, “this was written to be a movie, not a book” ? which is not a compliment, Mr. Weeks. The story didn't tie up like it could have so you are left unsatisfied. The ending is also where the emotional aspects of the story come to a head and Weeks just can't pull it off.

There is one interaction, between Doll Girl and Azoth that you have literally been waiting the entire book for and when it finally happens it is BLAH at best. When main characters die there should be an emotional response, but I had nothing. Nor did I think the ending fit with the rest of the book. It just didn’t work for me.

I can honestly say that if you want an action-packed, brain-candy book for a weekend at the lake, then pick up a copy. Definitely. I am glad I read it and I'll be reading the next book in the series, too. But, don't expect a solid, well-developed story. Read it for the action and intrigue. It is a paperback summer block-buster.