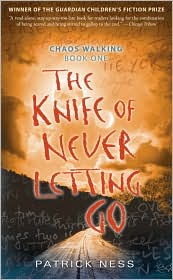 I was so mad at Patrick Ness at the end of The Knife of Never Letting Go. I even tweeted him telling him that I pouted and hated him for a little bit. That's actually a compliment. I read this book in a day and was so invested in the characters, Patrick Ness broke my heart.

That isn't giving anything away. I don't want to break your heart. I'll leave that to Patrick.

I almost stopped reading The Knife of Never Letting Go at the beginning. It wasn't because of the plot, but it was the voice. The story is told in the first person by young Todd Hewitt, an uneducated teen with poor grammar who can't spell. Words are intentionally spelled wrong and sentences aren't structured well. Call me whatever you'd like, but I have a hard time reading books written this way. I'm so glad I pushed through because this is a great book.

Todd Hewitt is the youngest person in Prentisstown, a town where all the women are dead and the men can hear each other's thoughts, and their thoughts are depressing. To escape all the chatter, Todd frequently visits the swamp on the outskirts of town with his dog, Manchee, who talks a lot about squirrels and poo. Yes, the thoughts of animals can also be heard.

When Todd comes across a girl in the swamp, his life will never be the same. Todd grew up believing that Prentisstown and its men were all that was left in the world. He was told that when they inhabited this new planet, the things living here had disease that caused people to hear everyone’s thoughts and the women to die. Then he met Viola whose thoughts he could not hear.

Wanting to tell his guardians about Viola, Todd rushes home, but something has happened and they need Todd to run. They give him a map and his mother's diary telling him that there are things he doesn't know about Prentisstown and those will help. Todd doesn't know why he has to leave, but he quickly packs a bag and heads back to the swamp and Viola, diary and map in tow. The only problem is that Todd doesn't read well and the map and diary puzzle him more than anything.

In the adventure that follows, Todd, Viola, and Manchee are on the run, chased by many people, including a psychotic clergyman, and Todd slowly and painfully discovers the truth about Prentisstown and his life.

I read this book in a day because I couldn't stop turning the pages. It’s a fast-paced coming-of-age adventure and I really started to care about Todd, Viola, and Manchee. I could feel Todd's heartache as he slowly discovered the truth, and while I figured it out a lot earlier than he did, it didn't hinder my enjoyment of watching him discover it.

The book ends with a huge cliffhanger which also made me mad at Patrick, but I just got the second book in the series so I’m sure I’ll feel better soon. I hope the second book is as captivating at this one.