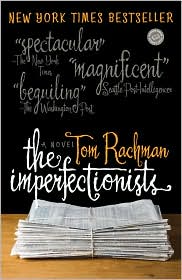 An air of sadness pervades Tom Rachman’s The Imperfectionists, his debut novel about an international paper based in Rome. It’s a sadness like faded newsprint (or even an industry itself) and it gives the novel an overall air of a culture whose time is up.

Style-wise, it reads like a collection of short stories. There’s the cold-shouldered accountant whose craving for a little workplace camaraderie is undone by her duty to constantly enforce unpopular budget cuts. There’s the copy editor whose desperation is evident to everyone but herself. There’s the editor whose improbable relationship with a younger woman finally reaches the point everyone told him it would. Even the novel’s lone comic-relief vignette comes at the significant expense of its protagonist, a young man struggling to break into journalism.

It’s not a cheerful book, but The Imperfectionists isn’t unbearably sad, either. Rachman writes about his characters with journalistic detachment, observing and reporting their condition but wallowing in it. This approach has it drawbacks – it’s a little hard to feel much for a character when he or she is only given one chapter and never out-and-out empathized with. Still, Rachman has assembled a colorful palette of characters and they work together to create a book rich with variety and perspective.