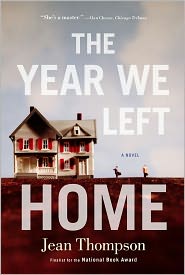 Reading Jean Thompson’s The Year We Left Home is a little like surviving a year in the Midwest. If you come here in the late spring it’s all glorious warm days and cool nights and bursting flowers and the smell of lilacs. It makes you wonder why everyone on the planet doesn’t want to live here.

Starting this latest novel/series of linked short stories feels a little like that. The book opens in 1973 with seventeen-year-old Ryan Erikson attending his sister’s wedding. The Eriksons are a tall Norwegian breed and possess the kind of stoicism Midwesterners are known for. While they often possess the Midwestern traits that have turned us into punchlines, in Thompson’s hands they are more than the stereotype.

She follows this family, siblings Anita, Ryan, Blake, and Torrie, their mother Audrey, and cousin Chip, through thirty years with each chapter/story moving them ahead a few years. Along the way we learn about the tragedies, large and small, that effect families who seem to be living the “American Dream.” From Vietnam Vets who can’t seem to get it together to petty infidelities to teenage rebellion and alcoholism, it’s all here and pretty engaging to read.

However, like a year in the Midwest the interminable winter arrives and the stories here tend to lag a bit in the middle. A lot of the chapters feature first son, second-born Ryan who is often described as too smart for his own good, but at times is too boring for words. We have one chapter with Ryan as a grad student/teacher assistant that made me question whether I even wanted to continue on with the book. But like winter, if you power through you are rewarded again with that glorious spring and languid summers and the beautiful, resplendent Fall.

On the surface this might seem like just another book dealing with the complicated emotions of families but underneath there is a hell of a lot of politics. Thompson has a lot to say about sexism and the politics of food and art and the big themes we wrestle with as humans. But she never comes off as preachy, the views and the issues are genuine to the characters who are struggling with them. It is awesome.

What I enjoyed so much about this book is that Thompson never looks down on her characters for their Midwesterness. She imbues them with the same sort of emotional conflicts and ideological struggles that many seem to think are reserved only for people who live on the coasts. But flyovers are rife with turmoil and she shows us that.

Through it all, there’s that air of “just trying to be/do good” Midwesterness about the book, and I loved that. There’s a scene in one chapter that takes place during a funeral luncheon in the church basement that is so real you can practically smell the hotdish and church coffee. We all have our reasons for reading fiction, many of which we can’t even name, but there is some kind of comfort in finding your culture, your place reflected in the fictional world. Midwesterners will find that here, and the big city folk will see that we’re not as boring as they seem to think.