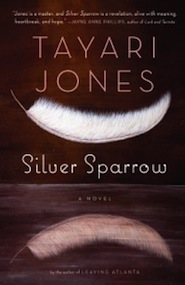 Dana and Chaurisse are sisters growing up in Atlanta of the 1980s. Chaurisse is the plain, flute-playing one. Dana’s the beautiful scientific-minded one. Oh, and she’s also a secret. The sisters’ father, James Witherspoon, is a bigamist.

Dana knows she’s the secret sister. She knows that Chaurisse and her mother, Laverne, get to enjoy all the benefits of being the acknowledged family, the real family. And this knowledge eats at her and the corners of her life.

Usually when you read a novel there’s a definite protagonist and an antagonist. This isn’t the case in Tayari Jones’ engaging and wonderful Silver Sparrow.

“Writers make choices,” it’s one of those workshop cliches. It ranks right up there with your story starts on page nine, and what does the character want.

Jones made a bold and brilliant choice in the way she told the story of Dana and Chaurisse. Instead of alternating chapters from each girl’s point of view, she let Dana spill out her and her mother’s story. Letting the little injustices build and build until the reader is pretty sure Chaurisse and Laverne have it made and that Dana and her mother Gwendolyn have truly gotten the shaft.

But halfway through the book she turns it all around, handing the story to Chaurisse who shows us that being the ‘real’ family hasn’t been all sunshine and lollipops. Chaurisse is a lonely outsider who spends most of her time working in her mom’s home salon longing for a best friend, or any friend.

It’s a powerful thing when you, the reader, know more than the character telling the story. It makes you worry about them, almost as though they were a child. So when Dana enters into Chaurisse’s life in the makeup section of a drug store, you know things aren’t going to end well and you worry for not just naive Chaurisse, but Dana too.

While Chaurisse revels in having a new friend and becomes increasingly interested in the mysterious Dana, my stomach filled with dread. Dana grows ever bolder in her friendship, even going so far as to show up at the beauty salon. Really, it’s the kind of delicious ‘she shouldn’t be doing that’ kind of stuff that makes reading books so often. Where would the story be if Dana didn’t?

From the moment Dana appears like ‘a Barbie doll dipped in chocolate’ in that drug store you know all will eventually be revealed. But you don’t know how or when or why or the fallout, which is what keeps you reading. So is the inevitable revelation satisfying? Hell yes it is. But lest you think this is a book that just works toward that secret, it’s not. It’s also a great story about coming of age as a black girl in 1980s Atlanta. It’s about beauty and fidelity and love and family and it’s really, really good.