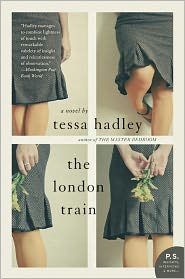 Paul’s mother has just died. She will continue to appear in his dreams. His of-age daughter Pia, from his first marriage, has dropped out of school and has hidden her pregnant self in an apartment in London with her older Polish boyfriend and his sister. Paul’s asshole neighbor is chopping down the trees in a gray area of property line limbo. When he and his wife get into a snit about how to handle the neighbor, Paul uses the argument as an emergency exit. He ditches out on domesticity — his sturdy upper crust wife who works in furniture restoration and their two young daughters — and takes the train into the city with plans to take care of Pia.

He falls face-first into Pia’s boyfriend’s sister’s couch and then wanders. He walks, he hangs in coffee shops, and eventually he is working with Pia’s boyfriend who is trying to build an import business.

Tessa Hadley takes a gamble, introducing readers first to Paul in her novel The London Train, which starts with Paul’s story, then segues into the story of a much more satisfying character, Cora whose life intersected Paul’s briefly.

Paul isn’t necessarily nice. He meanders. He is the type of person whom his friends reluctantly cover for, whose wife’s friends tolerate. He is a writer, not adverse to a fling, or an unsolicited cupping of a woman’s breast just because he cannot help himself. He’s going through a rough stretch to be sure. But it seems he wouldn’t not do these things if he wasn’t. He’s certainly not interesting. You imagine him walking with his hands in his pockets responding to the pokes and prods of chance.

After Paul’s slice ends, Hadley moves on to Cora’s story. The death of her mother, an inability to get pregnant, and a situation involving a fire for which her government employee husband is taking the heat has her crippled with depression. She leaves her job as an English teacher and returns to her childhood home, first to get it ready to be sold, eventually just moving in and taking a job at the local library. It takes Hadley a bit to pinpoint Cora’s funk. Then the backstory of Paul, a pompous man she had met on a train, emerges and it is clear that she took respite in a short-lived affair with him. Through her eyes, Paul is still self-centered. Dabbling in something that obviously means more to her. Stealing away for a weekend with her, but making sure she knows that if he has to choose, he chooses his wife and daughters.

For about 60 pages this is a gripping story, not a bodice ripper or fate or anything close to romantic. It’s a situation romance, seemingly medicinal for both of them. Curing Paul of the day-to-day prospect of living life, probably, and giving Cora something to look forward to. The rub: Cora is mentioned briefly in Paul’s part of the book. He refers to her generically as one of two women with whom he has had extra maritial daliances. Meanwhile, Cora waxes and wanes and has tear-lettings and rips up letters and stops cold in her tracks when she hears his voice on the radio.

It’s the meaning-of-Paul-to-Cora versus Cora’s-meaning-to-Paul that is the best part of a book that hangs out too long with the minutia, and then deviates into unlikely decisions and finales.