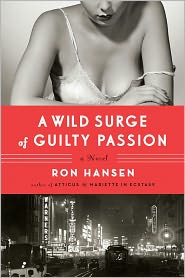 If ever a novel was to be played out in black and white, fogged with cigarette smoke, with images of spinning newspaper headlines, it would be Ron Hansen’s A Wild Surge of Guilty Passion, the writer’s fictional account of a highly publicized 1920s murder in New York City.

Hansen gets to the guts early. In the opening scene, nine-year-old Lorraine Snyder wakes up to find her mother bound in the hallway. Ruth Snyder tells the little girl to forget about untying her, go find a neighbor to help. Her husband Albert is found dead in their bedroom amid a chaotic and nonsensical crime scene and Ruth doesn’t do a very good job of hiding her involvement and that of her dippy married lover Judd Gray.

Flashback to the meeting between Ruth and Judd. The former is a chesty young sex kitten, a real flirt with a soprano purr, a social woman married to a preoccupied man with hobbies she doesn’t share. Judd is a lingerie salesman with tortoise shell glasses, a people person who has fallen into a loveless rut with his wife Isabel. His live-in mother-in-law makes his home life even less satisfying with her cutting remarks about how much he travels and drinks. They meet through a mutual friend and fall into a wild affair, messing up bed sheets in Manhattan hotels as well as those along Judd’s sales route.

Hansen paints Ruth as a master manipulator who easily plays the hapless Judd. She seduces him, stripping down to just her tan lines so he can apply lotion to her body in the moment that ignites the affair. Judd is a mess of guilt in the aftermath and tries in vain to stay away from her, ignoring her letters and burying the flashbacks. Ruth continues her full-court press, snags him hardcore, then wanes a bit to make sure he’s hooked. She tells Judd that her husband treats her like a prostitute. That he’s verbally abusive. She whips Judd into a tizzy about her home life until he’s practically foaming. Then she starts dropping hints about how she wishes her husband would just die. We know from the start of this easy-reader tabloid tale that Judd will eventually comply.

At about the point Ruth reveals the death-wish she has for her husband, this novel shifts into a black comedy. Albert has unknowingly signed on for a huge life insurance policy when the jack used to prop his car gives out while he’s working beneath it. A gas pipe is nicked while he’s napping alone in the house. A whole host of accidents befall the character, and Ruth is always standing beneath the shaky ladder or next to the broken jack when he emerges unscathed.

It’s impossible to tell, though, whether the duo’s love scenes fall into the bodice ripping noir area or whether they are purposely written in a hokey way. Worst love scene of the story:

Judd walked into her and sneered a little as he entered the soft and velvety caress of Ruth. She wryly gasped with false wide eyes as if he were enormous, and he smiled as he jammed himself in and out, holding off as long as he could, and then feeling his semen lash out of him with such force he loudly cried, “Ah!”

Judd is the better-drawn of the two characters. His feelings and intentions and misgivings are all revealed. His knows he is completely under Ruth’s spell. He struggles with confessing their involvement to his wife. He tries to back out even in those final moments before beaning Albert. Ruth is a trickier call. Does she actually love Judd or is he the neon exit sign in front of a door leading to the alley? Ruth’s version of her husband is one of a verbally abusive man who treats her like a prostitute. While he certainly comes across as a bit of a prick in scenes from their home life, definitely inattentive and condescending, but not nearly the monster she has cooked up. Is she smitten? Or is she a sociopath?

Also, the narration is a bit self-conscious. Most notably when Ruth goes on a business trip with Judd and rides along in the car during his sales calls. She waits for him in the car but is bored because, as the narrator says, car radios hadn’t yet been invented. It’s a weird detail that takes a reader out of the 1920s and into the future, looking back on the 1920s.

This story was all the rage and sold zillions of newspapers as the facts came to light and the couple landed in court. While it isn’t surprising or mind-blowing or different from any of the illicit-affair-turns-grizzly stories that crop up all the time, there is a deliciousness to the Prohibition Era setting and overwrought players involved. It’s not going to make anyone’s brain bigger for the effort, but it is a gooey summer treat.