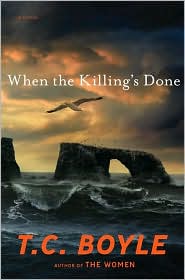 TC Boyle’s novel When the Killing’s Done pits dueling factions of animal-diggers against each other in a bloody battle.

In one corner is Alma Boyd Takesue, a researcher bent on killing the zillions of rats who have unnaturally come to inhabit a small island off of California. The furry-faced rodents are mucking up the ecosystem, killing off birds and throwing things out of whack. In the other corner is a dreadlocked veggie-head named David LaJoy, who believes it is ethically irresponsible to kill anything that is living, so he protests and vandalizes and invents a way to foil the attack on the rats.

What a snoozer, right. Like having the flu, losing the remote control in the couch cushions and being forced to watch a very special 10-hour PBS special in which people scream at each other while chained to a McDonalds.

The story opens with a scene that could be held spine to spine with Gulliver’s Travels or Robinson Crusoe. It’s truly a a leg-numbing, page turning adventure tale. It’s a flashback to when Alma’s grandmother Beverly was a newlywed trying, with her husband and brother-in-law, to get into the fishing business. After sunny times with beer and sandwiches and sea sickness, there is a wicked storm that demolishes the boat. The husband and brother-in-law drown and Beverly perches on a floating cooler, dehydrated, for days. Eventually she makes her way to a rat-filled island where she is presumably saved.

The kicker: She was unknowingly pregnant. At one point Boyle, who has a Type A control of words and applies them in a Type B sort of way, stops the story so the reader can imagine Alma telling this story across a table at a bar.

David LaJoy’s girlfriend Anise, a big-haired folk singer, has an equally gut-punching back story involving time spent on an almost deserted island as a child while her mother worked as an in-house cook for a handful of men who were tending the island’s sheep population. Anise is caught in a bloodletting when the owners of the property allow hunters to come in and bag some animals. And so she will never eat anything with a face again.

Aside from the two major digressions from the heart of the story, the rest of the plot involves Alma’s struggles with the aggressive David as the issue moves from Save the Rats to Save the Pigs. The vandalism, the chance meetings. She plays the straight-laced, government-on-my-side researcher to his sneaky, outside the rules counter attacks. It is, in true TC Boyle style, fun, funny and done with ease.