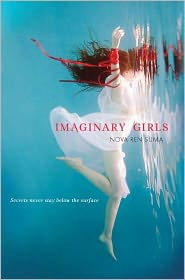 If we were allowed to judge books solely on their cover, Imaginary Girls would be the most beautiful, intriguing book I’ve read all year. But books are more than that and this one doesn’t live up to the cover’s promise.

A blend of magical realism and mystery, Imaginary Girls is the story of sisters Chloe and Ruby and the sacrifices women will make for the people they love. Though Ruby is technically her half sister, (“but we don’t count by halves,” Chloe says at one point in the book which made me cheer) Chloe wholly trusts her older sister and is willing to go to any length to make her happy. In this case, that length is swimming the old reservoir one night in an attempt to prove Ruby right in front of their gang of friends. The reservoir was created after the town of Olive was flooded like 100 years ago. Ruby loves to tell stories about the people who still live in Olive, the ones who refused to leave their homes even when the waters rose. She tells Chloe fairy tales of how they grew webbed fingers and learned to breath water.

On that fatal night, Ruby brags to her loyal subjects about Chloe’s swimming prowess and tells them she will dive down to Olive and bring back a souvenir.

Things don’t go well and Chloe is sent to Pennsylvania to live with her father. Two years later, twenty-two-year-old Ruby ventures forth to PA to bust Chloe, now sixteen, out of that domestic scene. Despite the protestations of her father and step-mom, Chloe heads back to the small New York town she came from.

On the surface everything seems the same; Ruby reigns supreme, bending the small-towners to her will, but things aren’t quite right. Chloe sees all this not-rightness but never gathers up the courage to ask anyone what the hell is going on even when all hell breaks loose.

It’s Chloe’s unwillingness to really talk to anyone that brings about so much frustration, at least for this reader.

Throughout the book we’re told, through Chloe’s eyes about how magical and beautiful and cunning and perfect Ruby is. I could buy that, to some degree, as Chloe being an unreliable narrator who can’t view her sister with any sort of objectivity. However, many of the people in town treat Ruby with the same reverence. I could buy that too, if it were all the people in town and Ruby really did have some powers. However, it turns out that about half follow Ruby blindly and the other half think she’s full of shit. Why? Are her powers that spotty? Does she even have powers? I have no idea, and the book never addresses it.

Ruby is a problematic character. We’re told repeatedly (to the point of overkill) about how special Ruby is, how she lives by her own rules and how she loves nobody, not the legions of men willing to do her bidding, as much as Chloe. However, we never really get to see what makes Ruby so special. Instead she comes off as a flaky, selfish, wanna-be mystic.

She doesn’t have a single direct conversation with anyone. Instead she has misty, dreamy half-conversations with everyone, including her own sister. Ruby doesn’t make a lick of sense in the entire book except when she tells Chloe that she can’t go cruising out of town and to stay away from Owen. We find out why she’s not supposed to leave town (in one of the best scenes of the book) but we never learn the deal with Owen.

Frustrating. That’s the overwhelming feeling this book left me with, and I wanted to love it so much. I tried. I love the idea of mixing the magical with the mundane ala Aimee Bender. I think the overall plot is deliciously creepy and intriguing, but it gets bogged down in repetition and too much coyness.