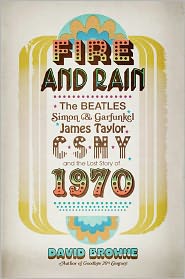 Fire and Rain is David Browne's attempt to bring music fans back to the the 1970s, when music was the center-point of anybody and everybody that mattered in society. He attempts to paint a picture of a time when music really mattered, when music could, in fact, change people, for better or worse.

This nonfiction novel is well researched, it’s clear Browne knows his music industry history. Along with this one he’s written three other music-based nonfiction novels, and is a contributing editor at the biggest music magazine, Rolling Stone. If you're a music buff and want to know all about The Beatles, Simon and Garfunkel, and James Taylor this is your go to book.

That being said, the book felt a bit forced. It’s clear Browne is a journalist and that is shown in his writing, while it is a nonfiction piece, the story did not seem to flow together. When he did try to make it flow it felt forced and a little bit painful to push yourself through. It was disappointing. I was expecting the book to flow as it does in the music of the 1970s but it wasn't happening. Browne is able to present to a point but unable to invest the reader into the famous characters he depicts.

The highlights were the research and the pictures, the rare pictures, and the fun facts that seemed virtually unknown by other music buffs. As a kid who was raised on this music and an avid reader, I expected more from Browne. It is always cool to know how people begin their careers, who they knew and how they met, I wanted much more from him. Instead, this felt like a series of articles somehow woven together using awkward jargon, and at times over describing situations that just did not need it.

I have to say though, for music fans of the 1970s this book will quench their thirst. Browne knows what he is talking about when it comes to artists and the music industry. He sets the stage for fans that want to reminisce or investigate the lives of their favorite artists, this will be a hit. For anyone else who thinks this may be an easy and exciting read, hear my cautionary tale, it is like the class in college where you expect fun and excitement, and instead fall asleep every day.