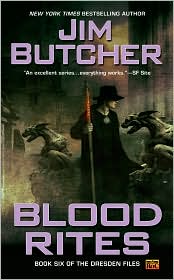 The title of the sixth book of the Dresden Files fits perfectly. Blood Rites is vampires, vampires, and more vampires. Toss in some interesting plot twists, new character additions, some major spell casting, and you have yourself a summer salad of science fiction awesomeness.

Jim Butcher never has just one story line. So while he's busy trying to stop a curse from killing innocent women, Harry discovers that a powerful vampire with wizard powers has come into town with a group of minions to kill him. As uncharacteristic as it sounds, Harry decides that the best way to deal with them is to kill them all before they have a chance to strike. He enlists the help of Murphy, Kincaid, and Ebenezer to get the job done.

In this novel we learn that Thomas is Harry's older brother ? their mother was a powerful wizard and we also learn that she was Ebenezer's apprentice when she was younger. This not only brings up family issues that Harry has dealt with in every book, but you start to see glimpses of the darker elements in the story line that come out in later books.

The absolute best part of this novel is the introduction of Mouse. He continues to be one of my favorite parts of the series moving forward.

Overall, this book isn't one of my favorite novels in the series for one reason ? the choppy storyline. The sense I get is that Butcher used this novel as a way to steer the series and add important key elements to the story line, but in order to do so he had to write a not-as-good-as-it-could-have-been story around it.

Sometimes I wonder if there were two or three books squished together to make this one. It doesn't flow well with the book before it. Don't get me wrong, I'm not going to discredit an author because a series spanning years doesn't flow perfectly. There are a few books in the series that don't flow with the overall series but as stand alone novels they are brilliant.

Blood Rites as a stand-alone novel is good, but as a piece of the whole series I enjoyed the book but I wasn't impressed.