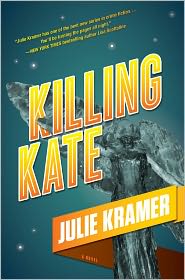 Besides being an award-winning TV new producer, Julie Kramer is the creator and author behind the wildly popular Riley Spartz mystery series. In fact, the fourth installment Killing Kate, was just released today. In case you need to play catch up the series also includes: Stalking Susan, Missing Mark, and Silencing Sam.

And if you want to catch up with Julie, you’ll have plenty of opportunity. She’s appearing all over the Twin Cities, starting at 7 p.m. tonight with the Killing Kate Launch Party at Once Upon a Crime (604 W 26th St. Minneapolis). Tomorrow (July 27) Julie will be at the Barnes & Noble Downtown (Midwest Plaza 801 Nicollet Mall Minneapolis) from 11 a.m. to 12:30 p.m. Thursday July 28 she’ll be at Common Good Books (165 Western Ave N Saint Paul) at 7:30 p.m. and she finishes off the week Friday morning at 9 a.m. you can see her at Lake Country Booksellers (4766 Washington Sq White Bear Lake, MN). You can also see her next week on Tuesday, August 2nd at 7 p.m. at The Bookcase (607 East Lake Street, Wayzata).

In the mean time, you can read her answers to the 6 questions we alway ask.

What book(s) are you currently reading?
I just reread Harry Potter and the Deathly Hallows so I’d be ready for the movie. Before that I finished Janet Evanovich’s Smokin’ Seventeen after meeting her during her six-hour long signing when she was in Minnesota. Now because I am hitting the book tour myself, I have to put my recreational reading aside and fret about promotion and staying on track for writing my next book. The stack by the bed keeps growing.

Have you ever had a crush on a fictional character? Who?
No comment. My husband might read this.

If your favorite author came to Minnesota, who would it be and what bar would you take him/her to?
Katherine Neville. I could read The Eight over and over again. And I would take her to Ursula’s Wine Bar in White Bear Lake and sit together at a corner table across the street from Cup n Cone.

What was your first favorite book?
All these questions about favorites are tough and often in flux. When I was visiting my mom on our family farm recently, I found a worn out paperback I loved as a child. So I’ll say Eagle Feather by Clyde Robert Bulla. I see now that it was first published in 1953. Young adult books were not as common as they are now. I remember being mesmerized by the trials the young hero faced and the decisions he was forced to make.

Let’s say Fahrenheit 451 comes to life, which book would you become in order to save it from annihilation?
These are very hard questions. This is more like writing a term paper than a blog. It’s too difficult to pick one book. I would get an e-reader so I could save all my favorite books. The Harry Potters. Lord of the Rings. All the Laura Ingalls books. Sue Grafton’s entire alphabet mysteries A-V rather than just one letter. Devil in a White City since I love true crime. All the President’s Men since it was my generation’s call to journalism. I could even save my own books without feeling selfish. Heck, I’d even save The Da Vinci Code.

What is one book you haven’t read but want to read before you die?
I’m not sure I want to read it, but I feel I probably should: War and Peace. I’ve been boycotting the classic for decades because I so disapproved of Tolstoy killing Anna Karenina. I feel the message of his story – you can’t build happiness on the pain of others – was clear enough without the train track scene. That was overkill.