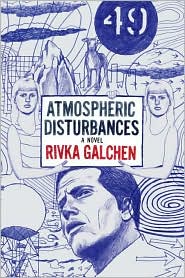 Leo Liebenstein, a middle-aged psychiatrist, believes that his young Argentine wife Rema has been replaced by a doppelganger. She looks like his wife. She’s dressed like his wife. She’s wearing his wife’s shampoo. But it isn’t her, he’s convinced, and the fact that the former dog-hater has picked up a stray and brought it into their home is a clue in his favor. He refers to her as a simulcrum.

Rivka Galchen is no joke. For my $5.99, the best short story from The New Yorker’s 20 Under 40 Fiction series was a comedic piece by her, “The Entire North Side Was Covered With Fire.” With Atmospheric Disturbances, her debut novel, she’s written a witty and complicated story starring an unreliable narrator who is trying to solve this missing-Rema riddle in a convoluted way, using exactly the kind of reasoning that has landed his paranoid schizophrenic patient Harvey in his care.

Speaking of Harvey: This all kind of starts with him. This patient believes that he is able to control weather and that he is a secret agent for the Royal Academy of Meteorology. He specializes in local weather patterns and receives orders through Page Six of the New York Post. It’s Rema who suggests to the doctor that rather than bringing Harvey back to reality, why not join in his unreality and play the part of his handler. That way Leo can keep Harvey from disappearing for days while he handles various missions.

Leo snags the name of an actual member of the Royal Academy of Meteorology, opting for Tzvi Gal-Chen, and this name becomes the one he uses to refer to as a liaison.

Harvey goes missing again around the same time that the Simulcrum replaces Rema, which sets off a series of events in which Leo travels to Argentina, develops an email correspondence with Tzvi Gal-Chen — who turns out to be dead, takes on the identity of a young ice climber and joins forces with Harvey to fine Rema. Meanwhile, “Fake Rema” follows him around the world.

Leo Liebenstein is no dummy. He begins considering his case from both the perspective of patient and doctor and considering the validity of what he believes to be true. He decides in favor of the patient. Psychosis, afterall, is the patient’s narrative and reflects his fears and desires. Since Leo never imagined his wife would be replaced by a double or that he would become involved with weather controllers, this was all borne externally and is likely true. If, for instance, he had instead imagined that Rema was seeing other men or thinking of killing him, that would be psychosis.

This book is tricky. It gets hard to follow the chain of associations Leo makes that link different facets of the Rema case, but it is well-worth hanging in there and wading through it. Any sort of plot disinterest I had was more than made up for by what Galchen is doing and how she is doing it. There are some really lovely parts, usually starring Rema. And there are some interesting ideas about the way the mind works.