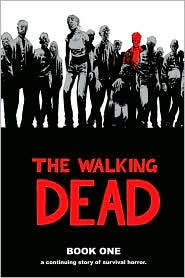 During scary movies, I'm that annoying woman in the theater who screams and grabs the person next to her, whether I know them or not. I've given the wrong impression to both men and women because of this, but I can't help it. It's like a nervous tick; I can't control it.

I don't understand the fascination with wanting to be scared. These movies just make me dream that I'm running from a maniac who wants to eat my eyes with a dull spoon. I don't need that kind of terror, so I rarely watch scary movies.

I don't know why I started watching “The Walking Dead” on AMC last year. I watched the first episode alone, gripping my pillow, my hands fanned against my face, peeking between my fingers. At least that's how I watched the beginning of the first episode where Officer Rick Grimes wakes up from being in a coma to discover the world is a very different, scary place.

“The Walking Dead” on AMC is based upon The Walking Dead graphic novels by Robert Kirkman, Tony Moore, Charlie Adlard, and Cliff Rathburn. The TV series has hooked me and I can't stop watching it, but maybe by reading some of the graphic novels I can stop my freak outs during the scary scenes.

This brings me to the first book in the series, The Walking Dead Book 1, which actually includes Volume 1: Days Gone Bye and Volume 2: Miles Behind Us. I wish I would've read this graphic novel first. Not because it's better than the TV series, but because it's worse.

In Days Gone Bye, small-town Officer Rick Grimes wakes from his coma in his hospital bed to find the hospital deserted. Hearing sounds on the other side of a barricaded door, he pries it open and stumbles upon hoards of zombies who try to attack him. Rick escapes from them and the hospital but sees the same deserted scenes throughout the rest of town, including his house. His family is missing. Are they dead or have they left?

Rick soon finds two living people who give him some advice: Atlanta, which is less than five hours away, is where people have been going to find solace from the zombies, so maybe his family has fled. Rick makes his way to Atlanta, first by car and then by horse, but Atlanta is just as barren as his small town, and filled with way more zombies. The zombies would've gotten Rick, too, had it not been for the help of another living stranger.

This is where Rick discovers a small camp of living people who live just outside Atlanta. And, not surprisingly, his wife and son are part of this small camp. Come on, you knew that was coming.

The rest of Days Gone Bye shows how they're surviving in the camp and includes some in-fighting between Rick and the other alpha male, his partner from the force who actually saved Rick's wife and son. You can just smell the love triangle, can't you? Ah, yes, the partner has fallen in love with Rick's wife in Rick's absence and has even sealed the deal with her at least once.

I'm not going to tell you how Days Gone Bye ends, but it's very different than the TV series.

In Miles Behind Us, Rick finally convinces everyone that it's too dangerous being this close to Atlanta and all its zombies, so they pack up and leave to find a new place. First they try a suburban, gated community, but it was overrun by zombies. Then they run into a farmer and his children, who were keeping zombies penned up in their barn, but the farmer doesn't allow them to stay. By the end of Miles Behind Us you get a glimpse of where they may make their new digs.

In both Days Gone Bye and Miles Behind Us, characters are killed by zombies, but I didn't care. The only character who is semi-developed is Rick; the rest are very flat. At one point the campers are sitting around a fire and Rick asks them what they all did beforehand. Each of their stories are somewhat heartbreaking, but they are short. Very short. I'm talking one frame of the page. In Miles Behind Us when the gossiping mother of two gets murdered by zombies, I had no emotional attachment to her making her death not important.

This is why I wish I read this graphic novel before the TV series. Had I read this before the series, I would've never turned on the television and I would've saved myself from the scary dreams of zombies eating my arm while I sleep. I have no idea how I would sleep through my arm being eaten, but I suppose that’s why it’s a dream.

So, something I rarely say is true here: the TV series is way better than the book. In the TV series the characters, even small characters, are really well developed, like the first two living people Rick sees after he leaves the hospital. They are a father and son, just like in the graphic novel, but in the novel they just seem to be there to let him know about Atlanta. In the TV series we find out about the mother, who is now a zombie, and how they see her from time to time. In one fabulous scene the father gets a gun and tries to shoot his wife in the head to put her out of her misery, but he can't do it. We get none of that in the graphic novel.

I'm not sure I'll read the other graphic novels in this series, but I can't stop watching the TV show now. I sense more dreams of zombies eating me in my future. Sigh.