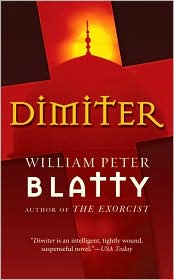 I don’t often read genre fiction (mysteries, horror, sci-fi, fantasy). It’s just not my thing. I prefer fiction where the story is moved forward by characters and character development. Genre fiction, in my experience, is often more plot-driven where characters are there to service the plot rather than the plot being driven by the characters.

So when my Rock & Roll Bookclub suggested we read Dimiter by William Peter Blatty I immediately started protesting via farty noises and gagging. Once that subsided I began working through the five stages of reading genre fiction.

1. Acceptance: Okay, you have to read a horror/mystery book. It’s going to be okay. You can do this. It’s good to keep an open mind and read things outside your comfort zone. This might turn out to be utterly delightful. With that pep talk in my head, I ordered up a copy of Dimiter from Amazon, and when it arrived it sat in its box on a chair, ignored for weeks. Finally, I downloaded the book from Audible hoping that would help me. It did and with only a bit of trepidation I began listening.

2. Denial: Three or four chapters in, and I’m not entirely sure what’s going on. We’re in Albania in the 70s and there’s a stranger being tortured in graphic detail for not revealing who he is. I’m unsure of who anyone is and why we’re torturing some poor guy. I can’t keep any of the characters straight. At this stage I’m starting to deny my own intelligence, thinking that perhaps I am too dumb for the book. I think I’m supposed to care about the atrocities being perpetrated against this mystery character and yet, I don’t. I know nothing about him at all. He could be a puppy kicking pedophile for all I know, though that wouldn’t merit the torture. Blatty spends all his time describing the scenery and the methods of torture rather than telling us why the torture is happening.

3. Bargaining: Okay, Blatty, you took me from Albania to Jerusalem. We’ve got a doctor, a cop, and a mystery man (clown, is it?) healing lepers. I think I got you here, but you have to give me something else. Why not some motivations? Why not the teeniest, tiniest reason to care about anyone in this story? Huh? Come on. Please?

4. Anger: Are you fucking kidding me? There was just a chapter with two unnamed characters having a conversation about another unnamed character. Really? This might be the most pointless book in the history of all of publishing. I have no idea what’s going on, I don’t care about the one character whose name I can remember (an Arab Christian cop named Peter Meral) because the author is so damn coy with everything. It’s all disjointed and I’m not sure what the scene before has to do with the scene that follows, ever, at all.

5. Depression: I can’t believe I wasted seven hours and thirty-five minutes of my life listening to this bullshit only to have the last 15 or so minutes explain all the crap that came before. Seriously, the book ends with two American agents quizzing Meral who then explains the whole story and the mystery around it. Really, the character basically says, “This is what all this meant.” This book is so awful and confusing it actually depressed me. How did this get published?