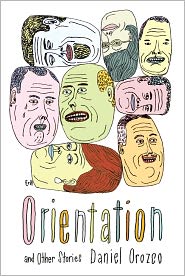 If I had a dollar for every time I have referenced, linked to, or told someone about Daniel Orozco’s short story “Orientation” (which you can listen to right here, fast forward to about 50:45), I could probably buy all of you a copy of his new short collection, Orientation: And Other Stories. You would thank me. This slim collection, a mere 176 pages, is goose-bump causing, breath-holding fantastic.

It’s filled with the kind of stories and writing that make you stop reading, close your eyes, clutch the book to your chest, and sigh. I did that roughly every four pages.

The collection opens with “Orientation” a story that both perfectly depicts life in a corporate America cubefarm and blows up the cliche at the same time. It’s the kind of story that devastates you when you least expect it. Which seems to be a theme for Orozco. In “I Run Every Day” we’re presented with a reclusive factory worker who keeps everyone at arm’s length. He claims to be okay with this:

“I'm alone, but I'm not lonely; there's loneliness and then there's solitude, which is a positive thing. It is good to be solitary, for solitude is difficult. Rilke said that. I've read him. I read books. I know who I am.”

Then everything changes when he has a cataclysmic run-in with a coworker. This story broke my heart.

And it only gets better from there. In “The Bridge” men who work on the Golden Gate bridge often find themselves face to face with jumpers. In “Hunger Tales” three stories of people dealing with their unique food issues — first a woman with a cookie-buying routine, another an angry 600-pound Gulf War vet, and the finally a father and son who must face Thanksgiving dinner after burying their wife and mother. In “Temporary Stories” the best temp at an employment agency works at three different places and must manage the intricacies of each office and the people she works with.

As a former corporate drone, I love the way Orozco writes about office life in contemporary America. Often writers (think Ed Park or Joshua Ferris) satirize office life or at least they think they’re satirizing it, but really they’re just writing about the way it actually is, at least all the negatives that come with working in a cube farm. It feels shallow and condescending as if the authors are looking down at all those sellouts who chain themselves to a desk rather spend their limited time on Earth creating.

In many “office novels” there is no kindness or humanity to be found which I guess is supposed to be the satire. Can you tell I’m not a fan? But what Orozco does is find the humanity in those places that try so hard to wash the stink of it from their workers. This is why his work resonates so much and doesn’t feel condescending.

But the collection isn’t all office politics and weirdos, there’s a bit of levity in “Officers Weep” a story told in police blotter entries, which is quite funny but has its poignant moments. And “Shakers” details the aftermath of an earthquake as it rolls across California and affects so many people. This is one of the goosebump stories.

I struggled a bit with “Somoza’s Dream,” the longest in the bunch, a story about a deposed South American dictator which is heavy on description and told from a many far-removed points of view. While reading it, I just kept thinking “this is so not my thing.”

But even with that, I cannot recommend this collection enough. It’s good. So so so good.