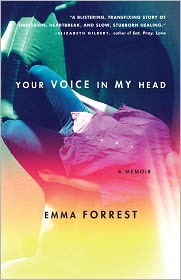 I should maybe alter that to: “Don’t read memoirs with mentally ill protagonists because I don’t want to give someone a D on a story about suicide attempts, cutting and bulimia.” Especially not someone who has already been pummeled with toxic internet sludge by Colin Ferrell fanatics who found her too fat, too ugly to be the actor’s girlfriend in the latter part of the 2000s.

Emma Forrest’s memoir Your Voice in my Head is billed as a love letter to Dr. R, the therapist who, for the most part, kept her off the ledge and helped her cope with life-long demons that were pushing her to end it all. It is also about those demons. But mostly it is about her relationship with a character she calls GH (“Gypsy Husband”), who is, according to the giant decoder ring in the sky, that easy-on-the-eyes, hard-on-the-heart actor Colin Ferrell — with whom she was in a relationship for somewhere between six months and a year. Dr. R dies in a way that is sudden to his patients — he hadn’t told them about the lung cancer — right around the same time that GH tells Emma he needs space and that, oh yeah, the baby they had planned on making, Pearl, is going to be a no-go.

Emma Forrest’s story starts with Ophelia, the painting she regularly visits at the Tate in London. She’s a teenaged girl sitting in front of it weeping. Scanning the background of the painting by Millais for a super secret man in the bushes who will emerge and save the woman in the water. This is an easy metaphor: Our protagonist will spend the rest of the book looking for a dude in the bushes to save her.

She’s young, but already a rock journalist and novelist, when she moves to New York City, which seems to pull her issues to surface level in a way that her mother likens to a fever breaking. There is bulimia and there are instances of cutting that are coaxed along by a boyfriend who shares this predilection and spends time with her in the bathroom and in bed carving into her flesh. She lands in Dr. R’s care, which is immediately followed by a suicide attempt which is followed by a more earnest attempt at healing.

The second half of the book is GH-heavy. This long distance, text heavy relationship that had Mr. H sending her gifts from location, including a worn T-shirt with a poem written on it. They are talking through the building of a life together, despite the negative online critiques she is receiving from the kind of people who post anonymous comments on celeb gossip websites.

The writing is nice. Sometimes even funny. The story is interesting in that way that all stories about being one fistful of pills and a warm bath from a funeral dirge are interesting — but also quite similar to everything that is shelved around it.

The protagonist, however, is a little hard to take. She never misses a moment to point out a chance meeting with an unnamed famous writer, a named famous former White House intern, or the story about the time she told Brad Pitt before interviewing him that her boyfriend was way hotter than him.

During a session with Dr. R, Forrest mentions the band Coldplay.

(Barf). I’ve spent a lot of time this past week thinking about what it is about namedropping that is so insufferable and have come up with this: It isn’t, per se. It is when there is a feeling that the namedropper is using the roster of Page Sixers to somehow validate her story. In post-publication interviews Forrest has said things like: It’s not necessarily Colin Ferrell that I’m writing about. I date a lot of movie stars. Sheesh.

Forrest is a good writer, descriptive and thoughtful. Sometimes even funny. At one point she writes about a random man she is diddling:

“The cat rescuer comes back for me, once, twice. We don’t know each other’s number, he just appears. Each time I am caught unawares and wearing something more schlumpy, bizarre and unflattering than the last. Like I have on a poncho and worms are coming out of my eyes and one of my arms is made out of Dudley Moore.”

Dudley Moore. But she shoots herself in the foot by leaning too hard on the tell-all side of the story. The I’m hanging out with a famous writer and we are writing together in this cabin and he’s downstairs and I’m downstairs and he’s famous and I’m singing and he comes upstairs and tells me to stop singing so loudly … moments that she can’t resist finding a way to drop into her story. I’d love to see something written by her — and maybe this exists, but I doubt it — that doesn’t include a lick of her own life.