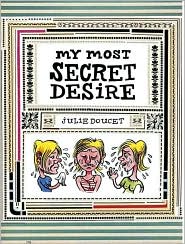 If Julie Doucet was a man, she would have a girlfriend with huge breasts. She would throw her down on the hood of a car and have her way with her. She would look similar to the woman version of herself, but with more of a V-shaped torso. She would zip up her pants and chuckle. Or maybe she would discover that she had grown a penis, and then shake her male member gleefully.

This is the sort of thing that crops up when the longtime cartoonist is asleep. The “If I was a man” premise creeps into her subconscious along with other super whacky dreamscapes in her collection My Most Secret Desire.

There is also the teeth-falling-out-of-the-mouth dream, the I’m-still-in-school dream, and the I’m-an-astronaut-dream. Each is told in this heavy-handed, darkly etched, highly detailed way that is dark and grisly and delicious. You wish you had dreams like this — meeting Micky Dolenz, for instance.

In another gender bender, she discovers that she has a penis and considers the usefulness of it. She can pop the top off of it and carry things inside of it. Magazines, a toothbrush, condoms. She can stick a flower through the hole at the top or use it as a third leg. She can harness it and pretend it’s a mustang.

One dream-within-a-dream finds her pregnant, sitting in the bathtub with her boyfriend. The child escapes through her stomach. She wakes, thinks that was weird, then proceeds to give birth to a cat that she breastfeeds in her bed.

This is some wicked stuff. Hilarious and detailed. Layered and interesting. A sort of R.Crumb if R. Crumb carried tampons. Julie Doucet seems to be that fantastic girl doodling dicks on her notebook.