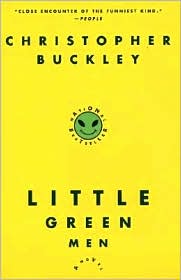 Okay, obsessed is a strong word. Fascinated is probably better. But I should clarify – I'm not overly fascinated by their possible existence; I'm fascinated by how believers are so certain of their existence and their visitations to Earth.

Have you seen “Ancient Aliens” on The History Channel? They can't figure out how people in ancient cultures did certain things, so they've must've had help from aliens. I cannot physically pry myself from the couch when the orange-tanned guy with the wacky black hair tells me how aliens helped the ancient Egyptians build the pyramids because they couldn't have done it on their own. The stones are just too big; they needed help and that help was from aliens. That's good stuff.

Or how about Roswell? Or the Canadian Roswell at Shag Harbor, Nova Scotia? Or the amazing 80-minute Dan Aykroyd interview (yes, THAT Dan Aykroyd) where he tells alien tales and calls upon us to demand the government tell us the truth? The truth is out there. It's Dan Aykroyd and he's totally serious.

Yes, all of this fascinates me. Aliens, abductions, crop circles, cattle mutilations, and predictions of alien help in our past will continue to fascinate me until believers are satisfied with an answer, which I don't think will ever happen unless the answer is that aliens are visiting us.

This brings me to a novel that makes fun of alien culture – Little Green Men by Christopher Buckley.

Buckley handles alien abductions the same way “Wag the Dog” handled war – they're real, but not in the way we think; they're staged by the government. Abductions are carried out by a secret segment of the CIA in the hopes that fear continues to spread and people continue to back defense and space funding.

Because of his abduction, Banion starts talking publicly about aliens, abductions, and UFOs, and his credibility and connections in Washington D.C. start to fade. He becomes obsessed with finding out the truth and demanding government officials do something.

After he ordered Banion's abduction, knowing it was not acceptable, Scrubbs goes on the run. He starts thinking his work laptop is programmed to blow up and people are tailing his every move. He also starts feeling bad for Banion. Eventually the two pair up and try to take down the establishment.

There are other laughable moments throughout the book, mostly dealing with the alien believers that start following and worshiping Banion. People claiming to be pregnant by aliens, others saying they were on the ship with Banion, and some intense alien groupies are all really amusing, especially because this is exactly what would happen if a high-profile person claimed to be abducted. The crazies would appear.

The Washington D.C. government culture is also laughable in some ways. All the backhanded deals and the influence of friends and celebrities is funny, but there is something missing in this book. I was into it in the beginning, but midway I started to get a bit bored. It loses momentum and by the end I didn't care whether or not Banion and Scrubbs would be prosecuted for things they did to try to out the government. It's a good book, but I wouldn't highly recommend it.