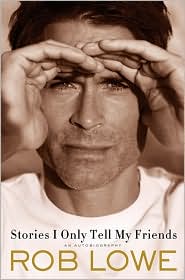 I was so firmly ensconced in Team Ponyboy that when I saw the movie version of “The Outsiders” in 1985, my loyalties immediately set up in the C. Thomas Howell camp. In fact, it wouldn’t be until my twenties when I could finally recognize and appreciate the wonder that is Matt Dillon.

With my Brat Pack allegiances in place it came as quite a surprise to me that I not only decided to listen to Rob Lowe’s autobiography Stories I Only Tell My Friends, but that I loved it so much upon finishing it, I went right back and started it again.

Man, the book is as witty and charming as you’d hope someone as attractive as Rob Lowe would be. He takes us through his childhood in Ohio where he is bitten early by the acting bug and spends a lot of time in community theater, through his parents’ divorce and a few stepdads, where he finally lands with his family on the sandy beaches of Santa Monica.

Before his big break in “The Outsiders” Lowe spends his high school years as an outsider who occasionally makes goofy amateur movies with the neighborhood kids — Chris Penn and Emilio Estevez and pines after the popular beauty, Holly Robinson Peete.

After the short-lived sitcom he was starring in comes to an abrupt halt, Lowe thinks his career may be over before it really starts, but then he gets a call to audition for Francis Ford Coppola’s new movie, “The Outsiders.”

The meat of the book is spent on the audition process and making of the movie, which could explain why I enjoyed it so much. Plus, when you add in the fact that I listened to the audiobook which is read by Lowe who does an amazing number of dead-on impersonations (Patrick Swayze, Emilio Estevez, Tom Cruise, Matt Dillon, Coppola, Chris Farley, Mike Myers, the list goes on and on), it was really hard to resist the charm.

Lowe does have a tendency to overuse the “guess who” trick, where he talks about having lunch with a young actress who is on Broadway in Annie. He finds her totally charming and is super-pumped when 20 years later his lunch date, Sarah, wins an Emmy for “Sex in the City.” He does this about a dozen times. So often, in fact, that I tried to turn it into a game where I would guess who he was talking about before the big reveal.

But even with the semi-annoying tic, Lowe’s self-deprecating humor and willingness to take responsibility for some of his poorer choices (videotaping sex with an underage girl) make up for it. Like most every issue of Tiger Beat you might have read, there’s not a lot of dirt here, Lowe uses most of the big revelations on himself (his struggles with alcoholism, his problems with fidelity). However, he does manage to get in a few zingers (Tom Cruise is very nearly a robot) in a way that doesn’t feel mean-spirited at all but good-natured. And, just like the biggest best issues of that teen-dream magazine you mostly learn a lot of fun trivia that makes you feel like an insider even though you aren’t (Tommy Howell was quite lucky with the local girls on the set of The Outsiders; JFK, Jr. championed hard for Lowe & “The West Wing;” Chris Farley put butter on his steak; Matt Dillon carried a boom box with him all the time on the set).

Really, it’s just so much fun — a perfect light read (or listen, and I would suggest listening to it).