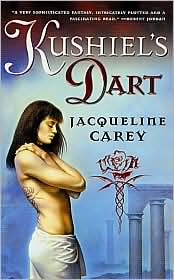 It was over a few glasses of wine with a friend that I found this book in my hands. I'd been lamenting the fact that I've never found a good sci-fi romance novel. Sometimes a girl just wants a sultry romance novel to read on the front porch in July. Is that too much to ask? Apparently not too much for Jacqueline Carey who delivers all that and more with her debut novel, Kushiel’s Dart.

Imagine JRR Tolkien and Jane Austen had a love child, a love child with a taste for S&M. Excited yet? Well, you should be.

Kushiel's Dart is set in the fictional land of Terra D'Ange. The story goes that the land was settled long ago by rebellious angels and was therefore blessed by god to be prosperous, to yield beautiful people, and abundance. Within this land there is a caste system that includes the Thirteen Houses of the Night Court. Each of these courts pays homage to the god Namaah through sex. Basically, prostitution is a noble calling and form of religious worship. Those indentured into the service of Namaah work of their debt to their House by seeing patrons until they have enough money to pay off their marque, at which time they have earned their freedom.

One such indentured worshipper of Namaah is Phedre.

At the age of four, Phedre was sold to the Cereus House by her mother. By the standards set in Terra D'Ange, Phedre was a beautiful but flawed child. In one eye she had a mote of scarlet. In a land of physical perfection, this one small flaw was seen as a life-long burden for the young girl. Until she met Anafiel Delaunay ? a man of wealth who took one look at her and realized this wasn't a flaw but a sign of distinction. She had been pricked by Kushiel's Dart and was therefore a true anguissette.

An anguissette is a person that derives pleasure from pain. Kushiel had been an angel that was in charge of torturing those that disobeyed god and his chosen had been given a unique gift ? they derived pure pleasure from pain. While there was a House devoted to his worship ? Valerian House ? Phedre was the first in living memory that was a true anguissette.

When she was ten, Phedre went to live with Anafiel and his other pupil, Alcuin. Together, she and Alcuin were given extensive training in politics, history, and the art of deception. Anafiel had chosen them as a way to gain access and knowledge to aid him in his spying for the royal court and to allow him to fulfill a promise he had made to a dead Prince.

Basically, pillow talk was what they were after.

Carey has written an epic story of sex, politics, love, loss, and religion. It is hard to imagine a story where the heroine is a submissive S&M prostitute for god, but Carey does it. She does it well and in a very classy manner. No one enters into service to Namaah until they are eighteen years old and there is nothing vulgar in her writing. You walk away from the novel with a sense of beauty in this way of life.

The first twenty chapters were a bit tough for me to swallow because of how intricate she gets with the history and political structure. I might not have made it through if it hadn't been for the storyline that she wove around Phedre. After she gets all of that out of her system, Carey launches into one of the best action/romance stories I've read in a very long time. Admittedly, I skimmed over a lot of the political and history paragraphs and could barely remember who was ruling where, and why it was important; but, even with a bare understanding of the politics behind the story I was able to fall into the action and in love with the characters. I just couldn't put it down.

What sets this book apart ? aside from the obvious sexual nature ? is that Carey doesn't follow a cookie cutter storyline. The mark of a great story is when you find yourself shocked by the direction the author chose to take and you both love them and hate them for it.

This is book one of a trilogy. I have hesitated to read the second novel because Carey has no qualms about killing beloved characters for the sake of the story. Personally, I had to find the third book and make sure that one character in particular would make it to the end before I could bring myself to add the next two books to my reading list. Pathetic, maybe. But when you have an author that creates such depth to her characters that you feel as if you know them personally, you need to take such precautions.

Kushiel's Dart is a great summer read and I highly recommend it for anyone that wants to enjoy a romance novel with true substance, depth, and a sci-fi twist.