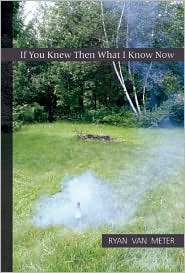 One of the things that drive me nuts in reviews and workshops is when the critic critiques a story based not on what it is, but rather what he or she wanted it to be. Right now I have to resist the urge to become the very thing I despise.

I wanted more from Ryan Van Meter’s If You Knew Then What I Know Now. Not because the book itself is lacking anything, but because I’m a greedy, greedy reader who could not get enough of his lovely, bittersweet prose.

This beautiful series of linked essays (it’s not a memoir, though sometimes I wanted it to be) is about Van Meter’s coming of age and coming out. Growing up gay in the suburbs of St. Louis isn’t easy for Van Meter, who spends a lot of the book knowing his is different, his is gay, and being unable to put words to it.

He struggles with his differentness in the face of parents who try to make him “more normal.” He spends a summer playing baseball, practicing for hours with his dad even though neither of them seem to be enjoying the experience at all.

In the book opening essay, “First,” Van Meter is a kindergartener in love with a neighbor boy named Ben. They sit in the wayback of the station wagon, facing the back of the car away from the adults, holding hands when Van Meter asks Ben to marry him. This is my favorite of all the essays (you can even read it online). Van Meter captures that joy of riding in the station wagon, the unadulterated affection children have for their friends all while managing to ratchet up the tension in that car until it’s almost too much to bear.

Damn, he’s good. It’s not often you read essays that are fraught with tension, but Van Meter manages to bring it out in the thousands of little turning points we experience in our lives. It’s the tension in these essays that make them so readable.

And while I loved the first essay the most, that’s not to say things go down hill from there. The book is filled with those kinds of exquisite, tension-filled moments. For instance, when his first girlfriend creates a shimmering bubble out of shredded plastic painters tarps, pillows, christmas lights and candles. It’s a place she deems perfect for their first kiss, an event that hadn’t happened even though they’d been dating for over a year.

Plus, I really enjoyed Van Meter’s struggle with the word faggot which finds him researching the word’s origins hoping to find out why it’s so a loaded. Hell, I really enjoyed the entire book because he captures the pain of being different so well. Often, Van Meter writes about how he prayed to God to make his differentness, in his case his homosexuality, go away. Reading this made me burst right into tears because as a young teen, I too prayed to God to make my own differentness, in my case being unusually tall, go away.

It was this ability to capture with such authenticity, and the bravery to share it that made reading If You Knew Then What I Know Now such a pleasure.

And, lest you think the book is filled with maudlin tales of woe, there is plenty of humor to go along with it — like how Van Meter’s mom is hooked on Tetris, Van Meter’s first “date” with a man even though he never realizes he’s on date, and the hijinks that ensue when two bored teenagers decide to exact revenge on an ex.