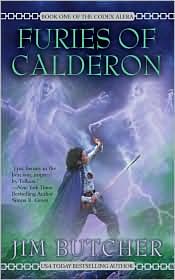 It has long been believed that all things in the world are composed of energy – people, plants, water, dirt. Everything. It has also been believed that this energy can be manipulated in ways that are both helpful and harmful. In Furies of Calderon, Jim Butcher takes this belief and adds his own twist.

Welcome to Alera – a beautiful, medieval land neighbored in the North by the Iceman, to the East by Barbarians and the West and South by all other flavors of savages. Governed by the aging First Lord Gaius Sexton and inhabited by High Lords, Citizens, Steadholders, Knights, Slaves, and a vast array of others. What makes these people unique is their ability to bond with and use the elemental energy around them – known as furies. The furies of air, water, Earth, fire, and metal are an extension and a part of every Alerian, except for one.

Tavi was raised on his aunt and uncle’s steadhold his entire fifteen years and was no stranger to dealing with run away sheep, wild furies, and the hardship of living in the valley. What he can’t do is fly on a wind fury, move large bolders with his earth fury, or mend injuries with his water fury. Tavi is an outcast and a freak among his people because he has not come into his furies and probably never will.

What starts as a day herding lost sheep ends with Tavi, his Uncle Bernard, Aunt Isana, and the rest of the steadholders in the valley stuck in the middle of a power struggle for the throne when those looking to overthrow an heirless Gaius decide to launch a secret attack on the Calderon Valley with the help of a band of savage cannibals known as the Marat.

Admittedly, I was skeptical that this story and the author would deliver. Butcher released Furies of Calderon four years after the first “Dresden Files” book was published and his fan base and the foundation of that popular series had been solidified. It has been my experience that it is rare for an author to pull off two completely different series without some overlap of concept, character development, plot, or shadows of the other.

Added to my weariness is the fact that Butcher has described “The Codex Alera” series as being inspired by Tolkien. Those are three words that make my eyes roll and my head hurt — “inspired by Tolkien.” Who hasn’t been inspired by Tolkien? I was inspired by Tolkien to learn Elvish and take up archery. Doesn’t mean I’m any good at either nor should I continue attempting them. Those words can be the kiss of death for an epic series because too many of those inspired fail to deliver.

“The Codex Alera” delivers. It is exactly what a modern-day epic should be: beautifully written, rich characters, and action-packed with deep story lines. n this first book, Butcher keeps the political elements on the lighter side and instead delves into developing his characters and setting the stage for the next five novels. In none of the books in this series does Butcher ever sacrifice the present story for the history of the epic. He maintains a perfect balance between the two.

The only element of the story I found a little unbelievable was the Marat’s ability to speak the Aleran language. They referred to it as a “trader tongue” but what would Aleran would be trading with a group of man-eating savages? There is a part in the book where it is said that no real intelligence has been gathered on them by the Crown because any Aleran that gets close is killed. Okay, so I might have bought it if they didn’t use relatively good grammar or if they didn’t conduct their ceremonies in Aleran so that captives could hear and understand. Then again, I think Butcher’s real point wasn’t in their bilingual ability and this minor question mark in the story is quickly overlooked because of the brilliance in the overall story.

I believe Tolkien would be inspired.