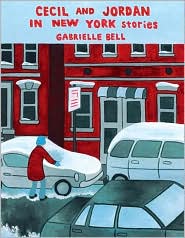 Imagine a linear story. Now imagine cartoonist Gabrielle Bell studying it with her hands on her hips. She takes a giant scissors, the kind used by mayors at ribbon cutting ceremonies, and makes two incisions into the tale. A snip here, a snip there. What’s left is a short story without context, unfettered by fatty back story and neat closing statements. Like walking into the middle of a conversation and then leaving before it ends — or before being told, for instance, it was all just a dream.

Cecil and Jordan in New York is a collection of graphic novel style short stories by Bell. It’s a mix of real low-impact slices of life, twisted tales in which a woman transforms herself into a chair or a giant man plucks a woman out of thin air and keeps her in a cage in his home, eventually filling it with a pet and a friend, an artistic re-telling of a Kate Chopin story, and seemingly autobiographical coming-of-age stories.

These stories are all told in the same steady no-panic voice — whether a woman is getting a potty-mouth bird caught in her hair or an artist is tutoring another artist’s neglected young son. At the center of these stories is usually a woman who stands unblinking in the face of the absurd or cruel, almost aware that in three panels things might change again.

The best of the collection is “Felix.” It opens with an art class in which an instructor is talking about negative space. When he lands on Anna’s painting of a nude woman with her feet in water, he describes it as “… Everything I dislike in painting.”

A visiting professional artist’s young son, Felix, digs Anna’s work, though, so the professional — who can pull in a cool million for an egg-shaped sculpture, hires her to help the kid make art. Anna’s unsure how to respond to a 12-year-old boy, so she lets him tag along while she works with a nude model. They work on flower arrangements. In his spare time, Felix works up portraits of Anna, which he stashes under his mattress. Things get wonky when Felix overhears his arty father telling Anna about how neither he nor his ex-wife wanted a child.

Gabrielle Bell is my favorite of favorite graphic novelists. Her brain lacks boundaries and you get the sense that she can get real weird with herself. The ordinary moments slant to wonky digressions. Then, like in the case of “I Feel Nothing,” the sort of bizarre encounter between a morning drinker who owns a trendy bar and the normal friendly girl downstairs, everything just goes back to normal.