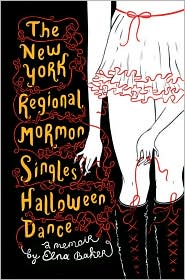 When I first picked up Elna Baker's memoir The New York Regional Mormon Singles Halloween Dance I didn't even realize it was a memoir. In all honesty, I picked it up because I thought the cover looked awesome.

After I realized it was a memoir, I got scared. Was this Elna chick going to try and shove her Mormon religion down my throat? Am I going to want to rip this book apart? The answer to both?of these questions is no. While her memoir does mention her faith and how she functions in her daily life because of her Mormon beliefs at no point does she talk about how awesome being a Mormon is and why everyone else should be one too.

Instead of making the entire book about being a Mormon living in New York City and trying to date, she shows the reader her insecurities about everything in her life. Not only being a practicing Mormon but also dating, opening up about her life-long battle with weight, with the wit and charm that suddenly makes you comfortable. At one point she was 250 pounds, lost over 80 pounds and then had plastic surgery because of excess skin. Like I said, this woman just doesn't hold back.

Baker's ability to let it all go is one of the most endearing aspects of her writing, not only does she talk about her most honest feelings but she is able to do it with humor. She finds the ability to poke fun at not only herself but aspects of her religion.

“I am the New York Regional Mormon Singles Halloween Dance. Thats right- it's a Halloween dance not just for all of the single Mormons between the ages of eighteen and thirty who live in Manhattan, it's for all the single Mormons in the tristate area. Thats a lot of virgins in one room. And I'm one of them.”

Baker opens the memoir telling the reader about the New York Regional Mormon Singles Halloween Dance, how she's been going for years in order to find “the one.” Then describing her disappointment year after year but still having optimism that one year it will work out, they will have funny costumes and fall in love.

Baker goes on to describe her family, all of her siblings, their unique relationships and always being identified as “the funny one.” She also kills the Mormon myths about having multiple wives, all Mormons being from Utah, and the Mormon “magical underwear.” She executes this with a skillful humor that cannot be matched, you don't think about her being a Mormon anymore, you think of her being a really funny person who just happens to be Mormon.

As the memoir goes on Baker confesses her first kiss. She was 16, he was 12. Then her first real kiss after moving to New York and the many more that follow. Baker lets you have it all, you get to find out when she tells someone that she's Mormon after going out on a date with them, the repercussions of telling someone that too early, and even keeps diagrams and lists of the men she has kissed.

After I started to read Baker's memoir I realized I was reading it as a series of stories from her life. These stories were all connected making the memoir possible but you could read this memoir as essays and the effect is still there. Baker allows the reader to dive into her own world, her thoughts and her feelings about everything in her life: men, religion, and why she even bothers buying lingerie.

Baker's ability to let the reader into her very personal and private life is at first almost overwhelming. Eventually you start to believe that she could really be you or one of your friends, you feel for her when she's sad, you share in her optimism, and you want to help her eat her feelings when she's heartbroken.

The New York Regional Mormon Singles Halloween Dance is definitely not your typical memoir and you should only read it if you want to make an imaginary best friend out of Elna Baker.