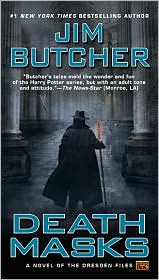 The only word to describe Book 5 of the Dresden Files series is INTENSE. There is so much going on that sometimes it is hard to keep up, but nonetheless Butcher delivers another great read.

For those that are following along I feel I need to clarify that my reviews of the Dresden Series are not completely unbiased. I've read the entire series and while I try to review each book on its own merit I find myself comparing it to Book 12 of the series, Changes. The series builds up to Changes and that book appears to be the pinnacle ? and some might argue the end – of the series. I should note that Butcher released Book 13, Ghost Stories this past April and I am anxious to see how he managed to keep the series going after?. oops? I almost got ahead of myself there.

Death Masks opens in the last place you'd expect ? a television studio. Harry is taping an episode of a local show that is all about the paranormal and unexplained. Ironically, he finds that all three of the other guests on the show are there to see him for one reason or another. Mortimer Lindquist is a local spiritualist with some information for him. Father Vincent, a Vatican priest, wants to hire him to recover a stolen church artifact. And then there is Professor Ortega, a Red Vampire Duke, who wants to kill him.

The war between the White Council of Wizards and the Red Court Vampires is still going strong and Ortega has challenged Dresden to a death duel to end the war. If Dresden wins, Chicago becomes neutral ground. If he loses, the Red Court will press for peace. If Dresden refuses the duel, Ortega will kill all of Dresden's friends and former clients. What's a guy to do?

While prepping for the duel, Dresden takes the job offered by Father Vincent. The stolen church article is none other than the Shroud of Turin. It is believed that the item was stolen and brought to Chicago for sale to a private buyer.

Add to all of that is Susan's return to help against the Red Court and her new found life, a gang of Denarians, and the decapitated body of an unknown person that appears to have died within hours of contracting every disease known to man ? effectively a plague that could wipe out the human race within weeks and you've got quite a story line going.

The Denarians are unions of a human host and a Fallen Angel. There are thirty Fallen Angels, each bound to a silver Roman denarius coin which bears the respective Fallen's sigil. It is believed that the thirty denarii represent the thirty pieces of silver paid to the apostle Judas to betray Jesus. Holding or touching the coin will allow the Fallen on the coin to inhabit your body and take over your soul in exchange for immortality and incredible power. They are in Chicago for two reasons: steal the Shroud of Turin and recruit Dresden.

There is also the usual line up of characters: Murphy, Thomas, Michael, even Marcone along with the introduction of a couple of new key characters such as The Archive, Kincaid, and the Denarians.

Death Masks is probably my favorite book in the series up to this point. The action is intense, the character additions are great, and the sarcastic humor keeps it from getting too dark. But, there is a lot going on here and Butcher introduces so many new elements that the points he seemed to be developing in the last four books feel lost. There is even a Merlin reference that just appears out of nowhere and I found myself thinking, “Wow. Really?”

Introducing the Denarians and how they tie into the ending of this book is also the beginning of a vein within the series that starts to show Dresden's darker side. We start to learn more about his past and his potential to be a really powerful, bad guy. The whole “I-am-more-powerful-than-I-appear-and-could-be-bad-but-I-am not” undertone is not something that I think Butcher is ever able to fully develop into the series and it feels a little awkward at times when he tries. His access to power is probably a stronger point then how powerful he is compared to other wizards. Dresden is humble about it and the only time you get a third person perspective (aside from someone always wanting him to come to the dark side) is in supporting stories like Back Up when Thomas Raith just goes on and on about how powerful he is. Outside of that, you really don't get a sense of it. This access to power is a huge beast that Dresden fights throughout the series and is a major reason why Book 12 is as intense as it is.

Death Masks is a buffet of action from the start and is not easy to set down. Definitely a great book when you just want to lose yourself in a story for hours.