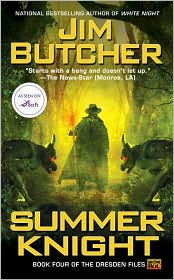 Until now, the Dresden Files series has been mainly action, the hard won luck of the main character, and your more stereotypical science fiction characters such as wizards, vampires, werewolves, faeries, ghouls, etc. Book Four of the series, Summer Knight, is a plunge into the complex structure of Butcher's series. Compared to the other books, it is less about action (even though there is plenty of that to go around) and more about the delicate balance of power that exists within the Faerie World and the White Council. Butcher also takes this opportunity to bring out a key character of Dresden's past, solidify new allies, and deepen existing bonds. This is really the starting point of the Dresden Files epic, in my mind.

The story opens with Harry in a bad state of affairs. Susan, having been bitten by a vampire, is still gone and Harry has thrown himself into finding a cure for her. His drive to find this cure has left him depressed, angry, and nearly penniless.

On top of his personal issues is the war between the White Council, the governing wizarding body, and the Red Court Vampires. This war was started by Harry in a previous book and his fellow wizards are to the point of throwing him over to the Red Court in hopes of stopping the war. His only redemption with his fellow wizards is to complete a task asked of him by Mab, the fae Winter Queen.

If one court gains more power than the other, a war will break out and no one would be able to stop the destruction that would follow for fae and humans alike.

There is a lot going on in this book that you don't really realize the significance of until further into the series. Even without the rest of the series, this is still an intense and brilliant read. In this book, we are introduced to Elaine ? a girl from Harry's past that he believed to be dead ? and two changelings (ie. Humans that must choose whether to live as mortals or as fae) named Lily and Fix. There is also the loveable Alpha's lead by Billy, Murphy, and Bob.

This book is what really solidifies the series as more than just brain-candy science fiction. Butcher takes it to a whole new level and adds an intricacy that was unexpected, but plays out beautifully throughout the rest of the novels in this series. There are elements of the story that won't be appreciated until you reach Book 12, Changes, and then you see how things come full circle and it all clicks. If the three previous books were tall mugs of cold beer, Summer Knight is a straight shot of whiskey that lingers on your tongue and warms your belly.