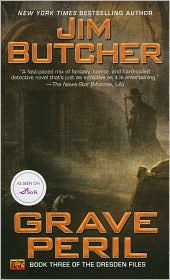 In the first two books of the Dresden Files series, Jim Butcher laid a solid foundation for Harry Copperfield Dresden, the only professional wizard listed in the yellow pages of Chicago. In book three, Grave Peril, Butcher just throws it all out there and says “Here it is ? take it or leave it.”

And let me just say, I'll take it.

Ghosts are running rampant throughout Chicago and Harry can't figure out how they are crossing out of the Nevernever and why they are causing so much destruction and death. Someone is letting them out. Coupled with that, Harry has to deal with increased tension between the Vampire Courts and the Wizard Council. Can't a guy catch a break?

Grave Peril opens up at a faster pace than his other books and we are introduced to three very important series characters: Thomas Raith, Michael Carpenter, and Lea.

Thomas Raith is a vampire of the White Court. He and Harry strike up an unlikely friendship that changes their lives forever. For those of you following along, there are three vampire courts: Red, White, and Black. Vampires of the White Court do not drink blood, rather they are emotional vampires and can leave their victims in catatonic states after draining them of their soul.

Michael Carpenter is a Knight of the Cross. He works with Harry to banish demons and other ungodly creatures all the while trying to get him to convert and turn his life over to God. Michael wields a sword called “Amoracchius.” It is one of three weapons given by God to mankind. Each has a nail from the cross worked into its design. Only the righteous can wield the weapon.

Lea is Harry's Godmother. Not in the sense of a sweet old lady that bakes cookies and knits sweaters. Lea is a fairy. A very powerful fairy. When Harry was younger, he made a foolish deal with her. While Lea tries to collect on what she's owed, Harry will do whatever he can to avoid her and her wrath.

The whole story comes to a head when Harry is invited to a masquerade ball hosted by the Red Court. One of my favorite moments in the book is when he shows up at this incredibly fancy vampire ball, dressed as a stereotypical Halloween Dracula with a cap, fake blood, and plastic teeth. Classic Harry Dresden humor.

The beginning of the book spends a little too much time catching the reader up on what happened in the two previous books, but once you get through that the story pushes forward. Sometimes the arrogance and sarcasm of the main character can be a little annoying and forced, but those moments are rare.

The ending of book three is heartbreaking yet leaves you clamoring for more. You don’t know it yet, but Butcher has just given you the last piece of the foundation for his series. The next nine books built on top of this foundation and continue to develop the characters while pushing the story beyond anywhere you imagine it would go.