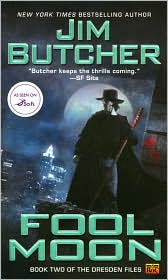 In the first Dresden Files book, Jim Butcher tosses out a crazy story line that by all rights should have crashed and burned but because of his brilliant writing and the depth of the characters, he hits a home run. So, I can't help but think that when book one was greedily eaten up by the masses and a second book was demanded Butcher had a Sally Fields acceptance speech moment. . . “you like me. . . you really, really like me!”

Yet again, Butcher delivers. This time Harry Dresden, professional wizard, is called in on a grisly murder where the victim was torn apart by a wild animal on the evening of a full-moon. Simple job ? find the killer before they do it again. Things get complicated when murders begin occurring outside of the full-moon which points to a completely different problem.

Of course things can't be easy. The first victim wasn't a random guy off the street, he was a key enforcer for Johnny Marcone the neighborhood organized crime boss that Dresden had a run-in with back in Book One. Sprinkle in a deepening friendship between Harry and Murphy, the local police lieutenant and a blossoming romance with reporter Susan Rodriguez and you've got yourself a great weekend read.

What sets Butcher's series apart is that he weaves into his story teachings about the paranormal and occult that those of us who have studied such things have stumbled upon time and again. It makes his stories believable and it adds a depth to his work that is beyond comparison.

For example, in Fool Moon we learn about the four types of werewolves: Hexenwolf, Lycanthropes, Loup-garou, and the classic werewolf.

The classic werewolf is a human who uses magic to turn into a werewolf and while doing so, they retain all of their humanity. A Hexenwolf is a person that uses a hide belt to change; essentially using someone else’s magic. They lose more and more of their humanity as they continue to use the belt. Lycanthropes turn into the beast only mentally. And the loup-garou is cursed to become a wolf-demon at the full-moon with supernatural speed and power.

Using all of this, Butcher is able to weave a strong story that makes you believe that all of this is possible. Many series follow-ups flop when the writer tries too hard or slacks because they are riding the wave of success from their first, but Jim Butcher delivers.