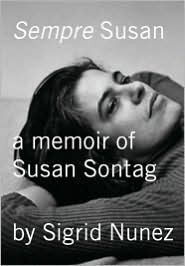 In mid-May Bob Dylan, then nearly to his 70th birthday, wrote something a little snarky on his website:

“Everybody knows by now that there’s a gazillion books on me either out or coming out in the near future. So I’m encouraging anybody who’s ever met me, heard me or even seen me, to get in on the action and scribble their own book. You never know, somebody might have a great book in them.”

I couldn’t stop thinking about this as I read one writer’s memoir, using life with another writer as a trigger. Sigrid Nunez’s short-shorty Sempre Susan is a memoir about essayist, feminist, prickly personality Susan Sontag. Nunez, herself a decently accomplished writer, has as much reason as anyone to write about Sontag: In 1976, when Nunez was in her mid-20s and recently graduated from Columbia’s MFA program, she dated Sontag’s son David Reiff. The three of them ended up living together for about a year, a scenario that had the lit community speculating about some twisted threesomes between the trio Sontag referred to as “the duke and duchess and duckling of Riverside Drive.”

Nunez had signed on to help Sontag catch up with her work after Sontag’s first go-round with cancer. Ultimately, Sontag played matchmaker between Nunez and Reiff, who was very shy.

Nunez paints Sontag as a lover of travel, who was always up for anything — including a Bruce Springsteen concert amid an audience of much younger fans. She didn’t work every day, but when she did it was at a drug-addled feverish pace. In the past, she’d had David assist her by lighting up cigarettes for her as she wrote. She hated to be alone and after a night on the town would wander into the room shared by Nunez and Reiff to deconstruct her evening. She took cabs everywhere and humiliated waitstaff. She was hugely complimentary of people, but also harsh about them. She couldn’t keep a secret. She loved men and women. She hated makeup and did not carry a purse and made fun of Nunez for slipping a handful of tampons into her purse. She made diluted Cream of Mushroom soup from a can the first time she and Nunez worked together.

Nunez writes this story at as a sort of stream of consciousness. As if she just plopped down in front of a computer and started writing and digressing and writing more. It hops from past to further past to recent past and back again. While it is really not at all about Nunez, occasionally something a bit biographical — perhaps about her own parents — will fall into the piece in a way that seems like maybe the material hadn’t been sifted well enough. It is a sort of journalistic take on Sontag that shows plenty of sides to the woman, including this interesting character who was a good ally, and the parts that would make her a terrifying person to spend time with. It’s heavier on the latter, which is consistent with most reports about Sontag. But sometimes it’s hard to find evidence to support that this was a mentor or any sort of inspiration to Nunez — who concedes that while Sontag’s essays are awesome, her fiction is meh.