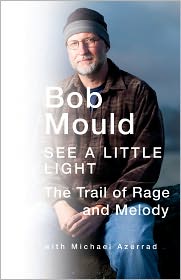 Reading Bob Mould’s autobiography, See a Little Light: The Trail of Rage and Melody, is a little like indulging someone you adore as they tell you about a dream they had about you last night. You listen patiently as they meander through the purple unicorns and how Michael Cera was Bruce from accounting until they get to the good stuff about you.

Of course, you would not put up with such bullshit unless it was someone you really, really adored. Because seriously? Life is too short for such meandering. The same could be said for Mould’s book. There’s a lot of meandering to get the good stuff. But when you get to the good stuff, it’s so good you forgive him for the exhausting and endless paragraphs about playing some place somewhere with some people whose names you will not remember.

But the good stuff? Holy shit! If you were ever a fan of any of Mould’s music, you know the acrimony between Mould and Grant Hart is legendary. Reading the book and watching as the tension builds until the band bursts is pretty thrilling. If you’re a fan of Minnesota music from the 80s or that early indie-punk rock scene the first third of the book is delicious, delicious insider-y bits of trivia and insight. I gobbled it up.

However, things get a little skim-able from there. Mould leaves no depth unplunged, no recording session undocumented. This is an exhaustive account of his life from dysfunctional family time in New York where he grew up to coming to terms with being openly gay — it’s all there and Mould is unflinching in chronicling it.

I expected a lot more rage and vitriol, but Mould is surprisingly controlled. Which, you discover as you turn pages, is the way he operates. When things anger him he shuts down, turns quiet, and walks away without explanation. It’s a routine he’s perfected, and recognizes as unhealthy. At one point in the book he said he had a hard time expressing emotion to the people in his life because he took all the turmoil and rage and sadness and funneled it all into his music, leaving him empty. It’s bits like this that make trudging through the boring stuff worth the effort.

But if you do make it through the slow parts you’ll be handsomely rewarded with little digs at The Replacements (which is my all-time favorite band), an inside peak at how Professional Wrestling works (Mould worked as a writer for a time), the shift in emotion and self-confidence as Mould fully-embraces his homosexuality, and a lot more.

It’s a little weird. When I sat down to type out my thoughts on the book I thought it would be much more negative (I really, really hated those boring bits and found myself skimming quite a bit of the touring crap and recording mumbo jumbo). However, before I typed a single word I cued up “Copper Blue” on iTunes, plugged in the cans, and turned the volume up to eardrum shattering. Roughly 30 seconds into “The Act We Act” my heart was doing that shaky love thing that happens when you hear music that seems to filter into your bones and becomes a part of who you are, how you define yourself. Listening to Mould’s music has softened all the hardness I had toward his autobiography and shined up the parts that I enjoyed.

So I suggest that to you. Read the book with one of your favorite Mould songs in your head (“See a Little Light” instantly comes to mind), it will help you get through the rough parts, which is exactly what the music did for him and the millions of people who fell in love with it.