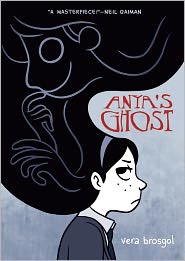 Anya’s your typical angst-ridden American teen. She’s unhappy with her perfectly fine body; constantly dieting; has a crush on the hottie basketball star and loathes his beautiful, perfect, blonde girlfriend; she’s got one friend she’s not particularly fond of; and she likes to ditch class at her private Catholic school to go outside and smoke. What’s not typical about Anya is that she’s a recent transplant from Russia who really works at being that typical American teen. She fears being seen as “fobby” (fresh off the boat) like diminutive, nerdy Dima, a Russian boy her mother would really like her to befriend.

After a fight with her friend, Anya stomps off and while cataloging the problems of her life (a scene that artist and author Vera Brosgol draws so wonderfully, I turned back to it a few times) manages to fall into a hole in the middle of the woods. Once she gets her wits about her, down at the bottom of the hole, Anya spots a ghost perched quietly atop the ribcage of a skeleton. Turns out the ghost, Emily, belongs to the 90-year-old bones and can’t wander too far from them.

Emily, who explains that she was murdered, seems friendly enough so when Anya is rescued and discovers a few days later that Emily has hitched a ride, she’s not too disturbed. Things with a friendly ghost are kind of fun and Emily quickly turns into a nice ego-bolstering friend for Anya. But life with a ghost isn’t all cheating on tests and getting the gumption to talk to the basketball hottie. Quicker than you can say “help me, Caspar” things go south. Emily goes from annoying to dangerous and Anya hurries up the quest for solving Emily’s murder.

Seeing Emily’s appearance change as she grows more sinister is just one of the fabulous ways the art here enhances the story (along with the the posters in Anya’s room, and the frame where she falls in gym class). Anya’s Ghost is a delicious little coming of age story with some ghostly shenanigans and danger thrown in, which elevates it from the well-worn teen angst territory.